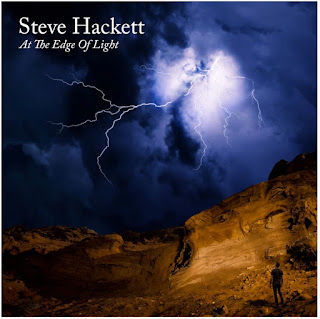 Steve Hackett just released At The Edge of Light on the Inside Out (Sony) label. I was sent the CD/DVD but decided to purchase the LP for additional listening pleasure. I am glad that I did. The album is a two-LP 180-Gram set with a CD included. This is something you get from most of the Inside Out vinyl so you get the best of both worlds and it's worth the price tag.

Hackett is a legendary figure in progressive rock and has a lot of music out there to dive into. With his Genesis days (while brilliant) long behind him, he is always moving forward and creating interesting music for longtime fans and new disciples to consume. I personally have not gone too far into his catalog, although I feel it is time for that to change.

I think Mr. Hackett is extremely underrated because his music has never been mainstream or commercial in any way. That is just fine with his audience in the prog sphere.

At The Edge of Light is two platters, 3 sides of music, and the fourth side has the etching of the lighting on the cover with the man standing there looking at it with the inscription “Turn and Face Whatever You Fear Most.” Keep that in mind as you listen to the music and read the lyrics found on the inner sleeves of the album jacket (yes food for thought).

Side one opens in grand style with epic sweeping music and some fine vocals offered by Hackett. I have always looked at him as a guitar hero but the man is equally adept with the vox humana. This is a very eclectic group of songs ranging from prog rock, flat out rocking segments, blues, and world. It has it all and very well done I may add.

Side two starts off with “Underground Railroad.” Hackett’s tribute the trials and tribulations of slaves. It starts off bluesy then leads into a spiritual/gospel type sound and feeling then transforms into an all-out rocker. The changing tides of the music in a sense must have fit the all-encompassing emotions a slave had reaching freedom at last through those dangerous passages. “Shadow and Flame,” is one of the more colorful tracks with world music infused into rock featuring the Duduk, which creates a drone, and the very recognizable Sitar.

Side three opens with “Hungry Years.” The track features some great harmonies and catchy runs that sound radio ready, however, that leads to some strong stinging leads from Hackett and some sturdy bass lines to keep that train rolling down the line. After all of that, it fades out then you move on to the next two tracks, which are significant instrumentals musically and thematically.

“Descent” has the resounding and rhythmic beats of marching soldiers off to war or making the “Descent” into that literal hell. Then all of that driving force folds into the “Conflict,” which is earmarked with a whirling dervish of sounds and more masterful lead guitar by the maestro Hackett. Then the fitting curtain closer “Peace,” after the “Conflict.”

So, you see there is a definite theme here that Hackett is presenting. I think what he is saying through music and words is what we are seeing worldwide. The wars, confusion, and atrocities of man that continue to this day are thought of while reading the lyrics and listening to the music push those words to the forefront of your mind. And perhaps for those tortured souls among us, who are raging their own wars with internal emotions that nobody knows but them.

But yet we all stand At The Edge of Light, a few steps away from that dark chasm that surrounds us. The true nature of man is at the center of the light and that thought gives us all hope as we listen to the musical prophets of the world. Steve Hackett has created a beautiful album that is diverse musically and lyrically. I do not think fans could have hoped for a better album. This work speaks highly of a man with superlative talents and a message to deliver.

Side 1:
1. Fallen Walls and Pedestals
2. Beasts In Our Time
3. Under The Eye of the Sun

Side 2:
4. Underground Railroad
5. These Golden Wings
6. Shadow and Flame

Side 4 :
Etching - “Turn and Face Whatever You Fear Most" 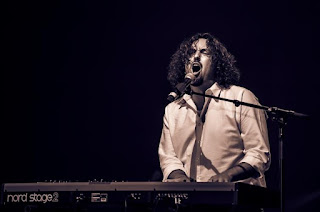 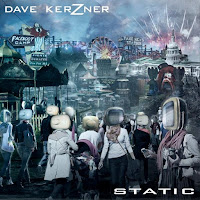 Genesis tribute band, The Musical Box, in CT this Friday!

The Musical Box: The Black Show at

Pepsi Rock SeriesPowered by xfinity
The 2nd version of Selling England by the Pound performed by Genesis in 1974 with completely re-imagined staging and visuals by Peter Gabriel. This performance is wildly known amongst early Genesis fans!
Posted by Keith "MuzikMan" Hannaleck at 1/11/2016 No comments:

Prog-rock shows 2016 at The Ridgefield Playhouse

JUST ANNOUNCED BY DAVID BOWIE HIMSELF! David Bowie bandmates, producer/bass player Tony Visconti, legendary and drummer Woody Woodmansey and Glenn Gregory, founding member and the frontman of Heaven 17, among other music luminaries, perform David Bowie’s seminal The Man Who Sold the World album plus a new set of other classic Bowie songs from 1969-73, with very special guests.
The Musical Box: The Black Show
Fri. January 15, 2016 – 8:00pm
The 2nd version of Selling England by the Pound performed by Genesis in 1974 with completely re-imagined staging and visuals by Peter Gabriel. This performance is wildly known amongst early Genesis fans!
The Who’s Tommy” – The Concert
Fri. January 22, 2016 – 8:00pm
A Daniel C. Levine Production
In 1969, Peter Townshend and ‘The Who’ released the double album of “Tommy”, a rock opera. In 1993, this iconic album became a hit Broadway show, and subsequently won 5 TONY Awards. Considered the greatest rock opera ever written, “The Who’s Tommy” includes legendary hits such as “The Acid Queen”, “Pinball Wizard”, “See Me, Feel Me”, and “Smash The Mirror”. Ridgefield Playhouse is THRILLED to present a concert of “The Who’s Tommy”.
The Machine Performs Pink Floyd
Sat. February 6, 2016 – 8:00pm
America’s #1 Pink Floyd show, has forged a 25 year reputation of excellence, extending the legacy of Pink Floyd, while creating another legacy all their own. They are back for another show at The Playhouse that is sure to sellout- performing all of Pink Floyd’s hits!
Candlebox
Wednesday, February 10, 2016 at 8pm
A special acoustic performance by the multi-platinum selling Seattle rock band best known for hit songs ‘Far Behind,’ ‘You,’ ‘It’s Alright’ and ‘Cover Me’ among many others!
Call Box Office at 203-438-5795 for tickets!
Posted by Keith "MuzikMan" Hannaleck at 12/16/2015 No comments: 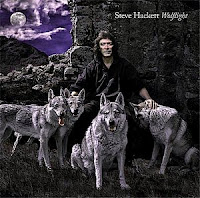 Mister Steve Hackett still delivers the goods, obviously not intent to rest on his considerable laurels and releasing another masterful work, showing that he remains predictably unpredictable. He has found new energy on the electric scene, not surprising as he has always come across as a consummate musician and a fan (his list of guest appearances runs in pages). When you have a bass/stick man of Nick Beggs' stature, how can one not be inspired? That was a true find, Stevo!

The greatest attribute I can think of in anointing Hackett with special accolades is that he gives the fans what they want: guitar innovations and solos! He is not a musical dilettante who amuses his ego by playing sloppily (and rarely) just to piss others off! I actually showed some you tube vids to an unsuspecting female music fan (who knew nothing of Hackett but knew of "Abacab") and she was shocked how great control and technique he displayed.

There are a few outright jewels here, from the title track to the exhilarating "Love Song to a Vampire", an archetypical Hackett anthem that blends a fabulous melody, choir work, blistering guitar phrasings, a thunderous beat and a genial structure that keeps things palpitating ! That choir blast amid the Roger King orchestrations is insane BTW! Instant pleasure!

The Brits seem fascinated by the carnival, it's an oft repeated theme in both music and film, a merry go round of seemingly simple social pleasures that are overt on the playful "The Wheel's Turning", mixing in the circus like stylings with some brawny playing (Beggs and drummer O'Toole really flex their muscles here), while Hackett tears off some wah-wah licks to great effect. Slightly bluesy and pure fun!

"Corycian Fire" refers to the Corycian cave in Greece, where the oracle began in ancient times and it depicts the rights of wild women invoking the rebirth of Dionysus. Hackett gives the piece a slight Mediterranean touch, with brash percussives and almost Wagnerian chanting that explodes mightily into the soaring sky.

The acoustic Hackett is equally enthralling, so "Earthshine" fulfills that function brilliantly, showcasing his ridiculous maitrise, his picking is phenomenal, rapid and precise. "Loving Sea" has a highly 70s resonance both musically and lyrically, lead and backing vocals conspiring together to create a very pastoral sound, sort of CSNY with prog tendencies. So as such such, its nice but not memorable.

But "Black Thunder" fixes that in a hurry, a booming and volatile beat with the rhythm section doing some serious heavy damage. The guitar attack is nasty, the choir backing voluptuous and the soloing simply devastating. Lots of stop and start themes, mood swings, hodgepodge of industrial sounds and a wickedly tortured solo, you really see the visceral Hackett at work here, not exactly softening up his old age attitude. He can and does, still rock. The highlight track must assuredly be "Dust and Dreams" , a perfect groove laid down by the Beggs-O'Toole tandem riding on burning coals, hot and smoldering, as Hackett drapes his Siberian toned guitar and unleashes a solo that curdles the blood and gooses the skin. Brrrrrr, bloody magic! The mood is oppressive, symphonic and demented, having a similar feel to his classic tune "In Memoriam" off the Darktown album.

This is not his best ever but a close third after Voyage and Spectral, a solid release by prog's resident strongman and legend. 4 lupo lux