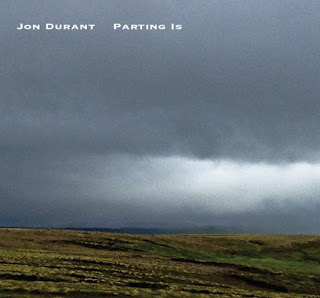 Boston, MA - Following three acclaimed CDs with his group Burnt Belief, Jon Durant has returned with his first solo album since 2011's “Dance of the Shadow Planets.” Unlike his previous solo albums, however, “Parting Is” is a completely solo guitar album.

A deeply emotional and personal record, “Parting Is” takes the idea of a solo guitar album and transforms it into a stunning sonic landscape of texture and color. Many of the sounds on the album bear no relationship with traditional guitar, but there are no synthesizers employed at all. Everything is played by Jon Durant on guitars (with Durant also playing fretless bass on four pieces).

Durant commented: “In recent years, I have been spending a lot of time away from people and places I love very much. My two boys are out of the house, one graduated college and the other is a senior in college this year. We have a wonderful time when I get to see them, but then they go away and there is a bit of a pang as we part. Also, we have a second home on the other side of the country (Portland, OR) where I spend a fair bit of time, and is also where much of this album began. Frequently my wife will join me for a long weekend, and I will stay on for another week or so, and of course there's the sadness when we part. What is reflected in this music is the sweet sorrow that comes from this parting - recognizing that it's temporary but still longing for more time together.”

About the music, Durant stated: “On most days, one of the first things I do is grab a cup of tea or coffee, and begin to experiment with my guitar. The music that comes out is not done with any intention of becoming a composition, or a recording, but is rather more of a meditation. However, a friend heard a brief recording of one such piece and asked why I didn't record more of them. When I began to do so, I felt a pattern was emerging that might be worth exploring.

“Many pieces begin as loops that I would play a melodic lead over. I recorded several of these, then began to deconstruct the loops and record the various parts as separate components which could become less loop like and more dynamic and flowing. The track, 'Open Window' is a perfect example of how that played out.”

That track, “Open Window” also provides an opportunity to explore the unusual sound and textures that Durant creates. The primary guitar which began as a loop is an electric 12 string. From there, multiple electric 12 string parts were layered in a minimalistic way. The melodic guitar is a fretless electric guitar, and the low tones (which sound a bit like the old Moog Bass Pedals) are generated from the fretless guitar. Also, swirling around in the background are Jon's unique cloud guitar sounds, notes which hang in the air like clouds with no discernable beginnings or endings.