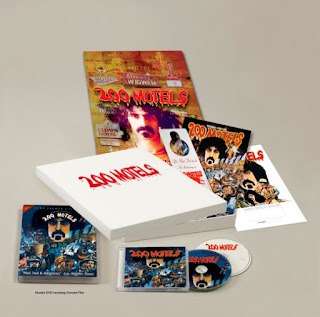 London - “200 Motels” is a 1971 American-British musical surrealist film co-written and directed by Frank Zappa and Tony Palmer and starring The Mothers of Invention, Theodore Bikel and Ringo Starr.

Gonzo Mulitimedia is releasing a limited edition box set of “200 Motels” - CD & DVD with Extras & Exclusives! The film DVD is mastered from Tony Palmer's original 2-inch masters. This is for the first time these masters have ever being used. The second disc contains extra concert material specially edited by “200 Motels” original director Tony Palmer.

In “200 Motels”, the film attempts to portray the craziness of life on the road as a rock musician. While on tour, The Mothers of Invention go crazy in the small fictional town of Centerville (“a real nice place to raise your kids up”), wander around, and get beaten up in “Redneck Eats”, a cowboy bar. In a cartoon interlude passed off as a “dental hygiene movie”, bassist “Jeff”, tired of playing what he refers to as “Zappa’s comedy music”, is persuaded by his bad conscience to quit the group, as did his real-life counterpart Jeff Simmons, who was fired for insubordination before the film began shooting. Simmons was replaced by Martin Lickert (who was Ringo's chauffeur) for the film.

The Orchestra was the Royal Philharmonic, including the great classical guitarist John Williams, and was conducted by Elgar Howarth who went on to become one of Britain's most distinguished conductors. And the choreography was devised by Gillian Lynne, who went on to 'invent' the Lloyd-Webber musical “Cats”. She always said that “200 Motels” was the inspiration for much that she later incorporated into “Cats”.

It was also the first film ever to be shot on 2-inch analogue videotape and successfully transferred to celluloid. “Star Wars” was only just around the corner.