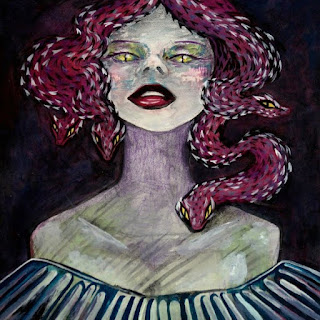 Austin, TX - Possibly one of the most anticipated releases of this year is the debut single and video by Texas rock band Those Damn Eyes entitled “Mysterious Mixture.” Founded in Austin, Texas Those Damn Eyes exudes powerful, sexy aggression through its sonic display of heavy-pop-rock. Led by front woman Alyssa Ehrhard and guitarist Daniel Corder, the two have created a strong collection of material that is bursting with high-range, beautifully sung melodies and finely-crafted musical arrangements that stimulate and embolden listeners to just…..give in.

“The concept behind 'Mysterious Mixture' explores the sentiment of a past relationship. I wanted to express the frustration, confusion, agony, and ecstasy in a beautiful way. Lyrically, I talk about this kind of emotional struggle. The video is an expression of acceptance and healing, showing that despite everything we still have the ability to smile and dance spontaneously. We still have the ability to be happy, no matter what might come our way. It's about my own journey of struggle and healing. Daniel is the 'good man' that found me as a diamond in the rough. I want to send a message to people who can relate to such struggle and healing; I want each of them to understand they're not alone.”


Those Damn Eyes' debut single release, “Mysterious Mixture” was written by vocalist Alyssa Ehrhard and guitarist Daniel Corder. Lyrical and melodic work took place shortly after the pair met in July of 2014, while music was written in the fall of 2013 and recorded in January '14. The band has had the fortunate opportunity to create its recordings with producer and bassist, Matt Noveskey. Their sessions take place at Orb Studios, a masterfully built studio in West Austin. Noveskey's experienced ear and knowledge of exceptional tone has been essential in forging the band's sonic identity.

Alyssa excels as an artist; in addition to her vocal talents, she is an exceptionally talented painter and uses her skilled-hand in creating band artwork. Daniel is a devoted composer and multi-instrumentalist who hones his skill through eclectic musical taste and collaborations in differing genres. Jake Rabin, drummer, has an admirable amount of talent and experience through his involvement in various bands in the Austin and Dallas music scenes. Marc Martell, guitarist, has developed a great finesse with lead guitar-work and shares a different project with Jake. Don Denham, bassist, works as a music teacher and bassist for hire and devotes time to his own passion project.