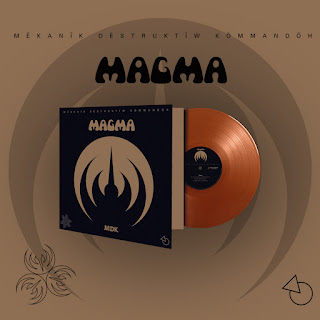 Limited edition of 2000 individually numbered copies on copper-colored vinyl. The album is housed in a gatefold sleeve with a copper foil finish on the front of the sleeve.

The only survivors of the previous formation, Christian VANDER and Klaus BLASQUIZ, surrounded by a renewed team of musicians, invested in the studios of the Manor in Oxford in 1973, to record their “MEKANIK DESTRUKTIW KOMMANDOH,” the album considered by many to be the conductor of work of MAGMA. A long piece articulated in seven movements, “MDK” went through a long gestation period before reaching its final state of achievement. The progress made between the short 45rpm version of the previous formation, where brass work predominated, and the one presented on this album, is considerable. All the credit goes to Christian VANDER who, now alone, will irreversibly take charge of MAGMA’s artistic destiny.

If the group’s instrumental performance has gained even more power, notably with the arrival at the bass of Jannick TOP, whose playing is revealed in perfect symbiosis with the spirit of the music of Christian VANDER, what strikes above all on “MDK” is the epic breath that emerges from the masterful work accomplished by the section vocal. Propelled by an inexorable rhythm and reinforced by a female choir where Stella VANDER appears for the first time, the voices of Klaus and Christian come to haunt our minds with these magnificent songs that seem straight from our collective memory, giving MAGMA’s music a timeless and universal character.