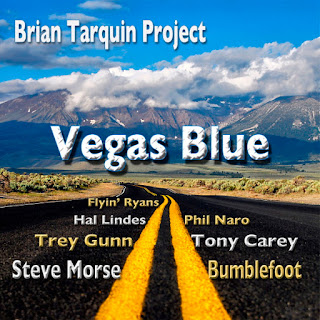 Las Vegas, Nevada, Mandalay Bay Hotel, October 1st, 2017. This was the site of a tragic and, all too familiar, occurrence involving a deadly mass shooting at the hands of a deranged gunman. What began that evening as a peaceful and celebratory country music concert ended in bullet-riddled chaos and carnage for countless patrons and innocent by-standers. This latest recording project by multi-Emmy winning guitarist/producer/engineer Brian Tarquin and company is dedicated to helping the families and survivors of this horrific mass shooting. And, in doing so, may also shine the spotlight on the need for sensible, responsible and humane gun laws and safety.

Says Brian, “This release is dedicated to the victims of the tragic events that occurred at  the Mandalay Bay Hotel in Las Vegas October 1, 2017. All of our hearts and prayers go out to them and their families. Through this music we have tried to creatively express our deepest feelings.”

If music is, indeed, a supreme healer then one needs look no further than this visionary endeavor. And, as with many of Tarquin’s previous charitable compilations, the material, guest stars and production is first rate. From start to finish the listener is transported to that fateful evening, yet uplifted through the power of these stellar performances.

Says Brian, “Time after time we watch senseless acts of gun violence in the news media creating a sense of indifference in our consciousness. We musicians have come together to bring emotion and awareness through our performances.”

Multi Emmy Award winning Brian Tarquin is an established top rate composer/guitarist. He has won 3 Emmy's for “Outstanding Achievement in Music Direction and Composition for a Drama Series” and has been nominated for an Emmy 6 times. In 2019 Tarquin received a Global Music Gold Award for his release “Orlando In Heaven” for “Best Album.” Three years in a row (2016-2019) Tarquin received “Best Album Of The Year” nominations from the Independent Music Awards for his releases “Guitars For Wounded Warriors,” “Orlando in Heaven” and “Guitars for Veterans.” On which, Tarquin shows his guitar prowess along side such world-class shredders as: Steve Morse, Larry Coryell, Mike Stern, Billy Sheehan, Gary Hoey, Bumblefoot (Guns N’ Roses), Reb Beach (Whitesnake), Hal Lindes (Dire Straits), Chris Poland (Megadeth) and Chuck Loeb (FourPlay). In 2006 SESAC honored him with the Network Television Performance Award. Tarquin has graced the Top Billboard Charts with such commercial releases as: “This is Acid Jazz, Vol. 2,” “Sweet Emotions,” and “Bossa Brava: Caliente” on Instinct Records, followed by several solo jazz albums, which charted Top 10 at Smooth Jazz Radio R&R and Gavin charts. Brian has appeared on 38 releases, selling over 140,000 records in his career.

Recorded at Jungle Room Studios, Florida 2018-2019 entirely thru a analog Trident mixing console on a 24 track Ampex 1200 tape machine and a Otari Radar, mixed down to a Ampex 440c 1/4” tape machine.

Here's what the press has said about “Vegas Blue”:

“The material, guest stars and production is first rate. From start to finish the listener is transported to that fateful evening, yet uplifted through the power of these stellar performances.” - Eric Harabadian, Progression Magazine

“Tarquin writes with soul and fire and plays with passion and precision. Once again, he has enlisted a first-rate squad of guests performers, including Trey Gunn (King Crimson), Steve Morse (Deep Purple) and Bumblefoot (GN'R), who help bring these rich, vivid recordings to life.” - Mark Nardone, Music Connection

“…every note, phrase, tone color, and impact of pick and/or finger on string will send shivers down your spine.” - Guitar Player Magazine

“…his passion for purity is more than evident – in both the music he makes and the way it’s recorded.” - Professional Sound Magazine