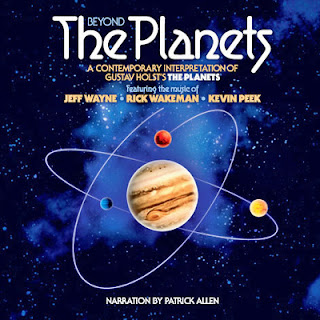 Have you even wondered what would happen if the king of progressive rock keyboards teamed up with the bloke who wrote “The War Of The Worlds” rock opera and the guitarist with the late lamented Classical Rock group Sky? Well, you need wonder no longer! A reviewer on the Prog Archives writes: “Beyond the planets” is essentially the performance of Holst's “The planets” in a rock context. Wayne's contribution is limited to the composition of an Overture for the album. As this ends, some brief narration by Patrick Allen is heard. Allen does a great impression of Richard Burton, which when combined with Wayne's distinctive sound, immediately creates echoes of “War of the Worlds.” Allen returns a couple of times during the album to link tracks together with further brief narration. The familiar introduction to “Mars” (as used by Rainbow on “Eyes of the World” among many others) then takes over, and we launch into a full rendition of “The Planets suite.” The music is performed dramatically and faithfully throughout, with Peek using various guitar sounds according to the mood of the piece.

This is a strict edition of 100 units, all hand numbered, pressed on 180 gram clear vinyl and personally SIGNED by Rick Wakeman released by The Strictly Limited Edition Vinyl Company. 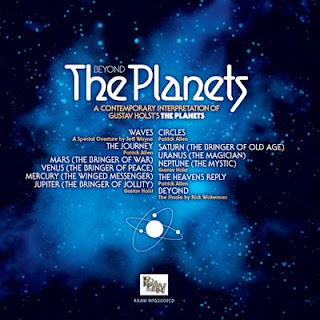 FACE B
1. Jupiter (The Bringer of Jollity)
2. Circles / Saturn (The Bringer of Old Age)
3. Uranus (The Magician)
4. Neptune (The Mystic) / The Heavens Reply / Beyond (The Finale written by Rick Wakeman)