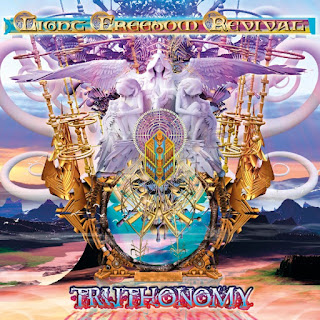 VANCOUVER BC - John Vehadija has reunited with his cast of high class musicians for ‘Truthonomy’, the new album by Light Freedom Revival, which is released on July 3rd, 2018.

Along the bright sounds of Jamie Glaser’s acoustic guitar, and Vehadija’s ethereal vocals, Billy Sherwood returns for the rhythm section (Drums and Bass), as well as Oliver Wakeman (piano and keyboards) and Marisa Frantz (Harmony Vocals). Eric Gillette also joins in the project by providing additional electric guitar as well as mixing and mastering.

This talented team was called up by Vehadija once again to help him express his ideas in the form of a new concept album that offers new insights in his own spiritual journey and the science of Truthonomy.

John Vehadija believes in the existence of an absolute truth and he relied on his spiritual knowledge to create a story of soul awakening, for the seeker to rediscover Creation as a living being self aware of itself. Truthonomy is defined to represent a light truth economy in an open universe system which develops society with divine tunnel visions of how to consciously manifest one’s destiny.

“It’s hard to explain how this album came to be because it was totally unplanned, but it’s partially based on my travels to major capitals on different continents, and so I tried to create a unified world perception beyond the countries we live in to reach a standard of a new kind of planetary civilization. As I was writing the songs,” said Vehadija, “I realized it is a concept album of someone moving through many parallel negative timelines, constantly searching for the truth, trying to find the original one that had once been his real home, a place from where it’s safe to project into the future and reality will not anti respond to soul impulse calculations. I’m proud of the way it came out, it represents almost a new style of music, you can love it or hate it, but you cannot dismiss it. I felt it was my soul mission to express this for humanity. I didn’t want to create dogma, I wanted to create freedom and awareness. I wanted it to be like a self reflective mirror for the soul. In my opinion we should all deal with the truth as we understand it, and not just put it aside it and ignore it forever.”

Jamie Glaser had this to say about the record: “‘Truthonomy’ is one of the most interesting projects I have gotten a chance to work on in recent memory. John is great to make music with; he’s a super talented man and I appreciated his positivity; he always makes sure to write stories in both words and music that keep the listener spiritually uplifted and sonically on an adventure. He gave me a lot of freedom to create my parts and it was always a great and fun challenge.”

“As I finished all bases and drums I realized it all sounded very cool!” said Billy Sherwood “I like the general feel for all the music, it’s a bit more simplified and earthy than the last CD! It was a fun record to make and I’m happy with the way it came out.”

Oliver Wakeman tells us: “I’m glad John was happy with the keyboard performances I recorded for his new album... there were a couple of tracks, like ‘Emma’ and ‘Lies No More’, which in particular I really enjoyed playing on. Working on John’s album also gave me the opportunity to use some new keyboard sounds courtesy of IK Multimedia as well as recording using my Dexibell piano. It’s always fun to play on a project with talented musicians and John has gathered a bunch of great artists to bring his vision to life. I’m pleased he asked me to be a part of it.”

Marisa Frantz who did the harmonies for the whole album, shares her thoughts about the song “Truthonomy” which clocks at just over sixteen minutes: “It’s a truly epic song, captivating from beginning to end! It has so many beautiful melodies which were fun to put together. I had to do a variety of backgrounds including lyrical harmonies as well as other vocal textures and dynamics. I also wanted to give it space to breathe in spots. It was a pleasure working on this project for John.”

“I have never seen a more beautiful thought provoking cover” Vehadija tells us about the CD artwork provided again by the international visual artist Ed Unitsky. “I’m very happy about this new album and that John contacted me again to create the cover!” said Unitsky.

Intended to be a true work of art, something that both prog audiences and music lovers in general will be very satisfied with, ‘Truthonomy’ is available in CD Digipack and MP3 Format starting July 3rd on lightfreedomrevival.com as well as Amazon, iTunes, Spotify and other major distributors.

For a limited time, ‘Truthonomy’ is also available in a ‘High Definition Audio’ Crystal USB format with bonus tracks on lightfreedomrevival.com 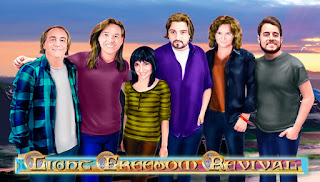