Wishbone Ash's Twin Barrels Burning and Raw To The Bone Released as Official and Remastered Definitive Editions - OUT NOW! 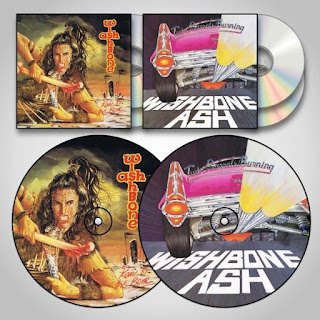 Each album is available on 2CD and Picture Disc LP with extensive bonus materials!

These are the FIRST OFFICIAL re-releases of Twin Barrels Burning from 1982 and Raw to the Bone from 1985 in decades and DEFINITIVE EDITIONS with all new 2017 REMASTERS.

Both albums feature new liner notes by rock journalist Dave Ling, including new interviews with all the surviving members and archive quotes from the late Trevor Bolder.

Twin Barrels Burning - This smoking hot 21 TRACK 2CD set includes the American Remixes of the album on a second disc, which have NEVER BEEN ON CD BEFORE.

Raw To The Bone - This mammoth 23 TRACK 2CD set has bonus tracks including a HOLY GRAIL for Wishbone Ash fans – ALL FOUR UNRELEASED SONGS from the post-album 1986 SESSIONS. The bonus CD also includes The Friday Rock Show BBC Sessions, which are often described as better than the album versions, plus four live tracks from Hammersmith.

“Neither of these hard hitting albums were what I would call typical mainstream Wishbone Ash fare. In other words they weren't heavy on the signature harmonised vocals and twin lead guitar lines. However, they both show that we could rock out with the best of them.” - Andy Powell

“It's a chapter of Wishbone Ash's career we are proud of and we know fans have been asking for these re-releases for years. A great deal of care has been given by everyone in sourcing master tapes, taking part in interviews for the liner notes and presenting these as band endorsed Definitive Editions. It's unbelievable to think they've never been on CD until now!” - Laurie Wisefield

These re-issues by Cherry Red are FULLY APPROVED by Steve Upton, Laurie Wisefield, Andy Powell, Merv Spence, and the estate of Trevor Bolder.

The second disc of bonus tracks accompanying each CD will not be available with any other product or box set.