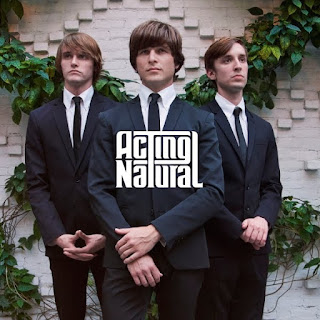 NYC - ACTING NATURAL lead singer & guitarist Eric Carnevale, bass guitarist/vocalist James David Maney, and drummer/vocalist Jesse Leonard are fueled by a mutual interest in bringing back the authenticity of raw Rock & Roll music. Their new ACTING NATURAL EP is a stunning debut that proves they have aligned their unwavering dedication to creating quality music with a signature sound. The ACTING NATURAL EP will have a worldwide digital release on September 22, 2017, followed by a physical CD release on October 20, 2017. Coinciding with the digital release, ACTING NATURAL will be attending the iHeartMusic Festival on September 22 in Las Vegas, NV.

ACTING NATURAL released their first single “Pairadice” and the response was incredible, reaching #1 on the Top 5 Most Added and reached #9 on the FMQB A/C Chart. ACTING NATURAL’s unique sound is focused on passion and solid musicianship, and their inspirations range from legendary artists of the past and present, including Red Hot Chili Peppers, Led Zeppelin, and The Beatles, just to name a few.

This young trio, originally from Tampa, Florida, and each a multi-instrumentalist with refreshingly down-to-earth dispositions, started their journey together at the age of just 13 years old. They began writing and recording original material not long after, instinctively creating a fresh sound with Rock & Roll roots and modern vibes. Singing three-part harmonies, their distinctive blend of music and lyrics is drawn from personal inspirations and experiences, allowing the band to be fully expressive and creative in their songwriting. The band recently re-located to New York, and they are thrilled about what the future holds.

The making of the new ACTING NATURAL EP was an exciting process for the band, who loves recording and just being in the studio atmosphere. “It’s a very magical place,” says lead singer Eric Carnevale. “We selected some songs of ours that we had recently laid down on a demo, and wanted to go in and really record them properly.” They called up their good friend / engineer Jim Morris, owner of Morrisound Recording in Tampa, FL, and got to work on the first few tracks of the EP.

The sessions were filled with memorable moments and strong efforts from the whole group. During the recording process, they ended up writing a few brand-new songs in the studio, which led to the writing and the recording being finished all within the same session. The whole project was a joint effort, with JD playing some great bass, Jesse laying down the drums, and both harmonizing with Eric on lead vocals and guitar/piano/percussion. They worked around the clock, sometimes going straight through the night and only catching a couple hours of rest between sessions. Eric says, “I'll never forget being in the booth just finishing laying down the vocals for the bridge of a song called 'Nicole,' and I looked down at the time and it was 7:45AM! I said that's it, I'm going to bed!”

Acting Natural simply means to naturally be what you are. To be Aware, Awake, Able and Alive. The band’s artistry is instinctive. With their appealing on-stage chemistry and addictive melodies, ACTING NATURAL is confident in their ability to leave an impact and connect to audiences. “We are musicians, but we are also huge fans of music. It’s our identity, it’s in our blood. Our focus is music, period,” remarks Maney.

Although the band’s primary genre is rock, their music manages to cross genres and generations, attracting people from all sides of the spectrum and any ethnicity, from kids in their early teens to adults over 60. This an extremely unique quality to an artist that is not often discovered. “Being accepted by people from many different styles and walks of life is a really beautiful thing for us. We’ve played in everything from hip hop clubs, to hardcore metal venues and have been so grateful for such a positive response across the board.

It’s a spiritual feeling really. We get to play to people. Not these people, or those people…All people. Music has so much power. If we can contribute to even the slightest bit of bringing people together, we believe that’s a whole other accomplishment on its own, bigger than anything.”

With growing notoriety on the east coast, the band has their goals set on gaining new awareness on a larger platform, while continually pushing Rock & Roll music forward as artists. “We just want to play music with no constraints and be as innovative as possible, while performing for fans that allow us to consistently create and share our music,” says Carnevale. ACTING NATURAL strives to prove that raw talent, ambition, and honesty can still prevail in today’s music industry.

The new ACTING NATURAL EP will have a worldwide digital release on September 22, 2017, followed by a physical CD release on October 20, 2017, with national radio exposure, large-scale marketing campaigns, and tours to follow. The future looks bright for this talented and committed group. Follow along with their journey on their website and social media pages.

For more information about ACTING NATURAL, please visit their website and social media pages via http://www.actingnaturalmusic.com/

To order the ACTING NATURAL EP on iTunes please visit https://itunes.apple.com/us/album/acting-natural-ep/id1286849909 or http://smarturl.it/actingnatural

For Press and Interview inquiries, please contact Billy James of Glass Onyon PR at
(828) 350-8158 or glassonyonpr@gmail.com