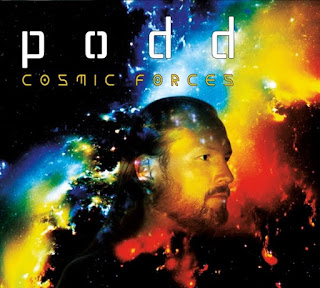 Podd, the new instrumental, progressive rock band, presents their debut album “Cosmic Forces,” drawing inspiration from the flood plains of the Mississippi Delta, the mountains of Macedonia, to the foothills of the Himalayas. Podd's original compositions are born from personal introspection. It is a kind of musical storytelling without words, told with the impressions and colors only sound can evoke. Featuring Peter Olsen; guitars, Dejan Dejkoski; drums and percussion, Eric Olsen; keyboards, Takashi Otsuka; bass guitar.

Podd is the brainchild of Peter Olsen. His eclectic compositions, born from his years as an ever searching guitarist, are made manifest by his musical compatriots Dejan Dejkoski, Eric Olsen and Takashi Otsuka. The Podd sound is intense, complex, and variegated, but always funky. Podd's music is intended as a visceral experience that takes the mind on a journey.

Dejan Dejkoski brings the perfect expression of a driving rock-fusion sound combined with the quirky world beats of his native Macedonia. Takashi Otsukas jazz-steeped finger-style bass playing and advanced theoretical background adds emphasis and counterpoint. Eric Olsen, his arch musicianship in both the jazz and classical music scenes at play, lends chordal and melodic depth to the music.

Podd as a name, is an amalgam of Peter Olsen (PO) and Dejan Dejkoski (DD) who form the core of the band. Peter and Dejan codified the overall feel and arrangements of the tunes. The album was recorded at Peter Olsen's Aqua Velour Studio with Peter as the recording engineer. Mixing of the album was by Dave O'Donnell with mastering completed by Scott Hull of Masterdisk.

Podd is currently working on a feature video for “Beyond Beyond” off of the “Cosmic Forces” album. The band has written all new material for their second album (title unknown) and has already begun the recording process.

Peter Olsen; guitarist, composer, producer - A self taught guitarist Peter has fronted bands playing his original music since the age of 16. He has composed and played guitar in various acoustic and electric ensembles. Past efforts include his world fusion duo Advaita with Dan Johnson, collaboration and support with Prasanna Thokchom (classical Indian sitarist), Saida Fikri (Morocco) and Ustad Shabbir Nisar (India). Podd represents the apex of Peters guitar and compositional style. Peter has two other CD releases: “Arcadia” with Eric Olsen, 2010, and “The Portal” in 2011. His production company website Holus Bolus Productions can be found at www.holusbolusproductions.com.

Dejan Dejkoski; drums & percussion - Dejan comes from a musical family steeped in the rhythms of his homeland Macedonia. His father, a professional musician, exposed him at an early age to the drums. Dejan played drums with multiple outfits growing up until he moved to the USA to pursue a career in music. His interests know no boundaries with Podd representing his current state.

Eric Olsen; keyboards - Eric has crafted a distinguished career in both jazz and classical music, as a pianist and composer, harpsichordist, synthesist, organist, conductor, and accompanist. He has recorded twenty albums to great critical acclaim, with artists Randy Brecker, Ted Nash, George Garzone, Don Braden, Ratzo Harris, Tim Horner, Peter Olsen, Bucky Pizzarelli, Lou Caimano, Jan Carden, Kevin Maynor, and Larry Newcomb, and performed with jazz luminaries Billy Hart and Eliot Zigmund. He has appeared in concert from Carnegie Hall to Birdland, with orchestra in Taiwan, throughout the United States, and overseas in France, Germany, India, the Fiji Islands, and New Zealand. He teaches at Montclair State University and the Wharton Center for the Performing Arts, and is Director of Music and Organist at Union Congregational Church in Montclair, NJ. More information is available at www.ericolsenmusic.com and www.dyadplays.com.

Takashi Otsuka; bass guitar - Takashi studied composition, arranging and improvisation theory at Berklee College of Music. He has performed with various artists such as the Boston Symphony Orchestra, The Boys Choir of Harlem, Ben E. King, Swing Express, Composer's Workshop Big Band, Latin Jazz Orchestra and many other jazz musicians. Takashi worked as a bass instructor for four years at Professional Music studios, Inc. and has been teaching privately for the last ten years. 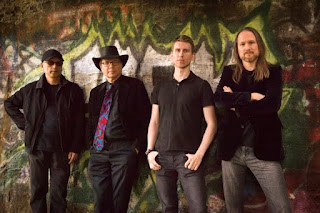