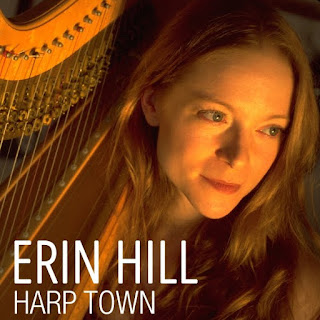 Los Angeles, CA - You may not know her by name, but it’s highly likely that you’ve seen the enormously talented musician/actor Erin Hill on TV or on stage. A masterful harpist with a golden singing voice, Hill has performed as back-up to such major artists as Kanye West, Enya, moby, Cyndi Lauper, ‘80s new wave icons A-ha, Randy Newman, Sinead O’Connor, Jewel, and many others. In addition, Hill has appeared on several TV shows such as Bravo’s Million Dollar Listing and Comedy Central’s Chappelle’s Show appearing in the infamous skit as the “Pretty White Girl” who sings Dave’s darkest, most private thoughts, PLUS the Tim Robbins film Cradle Will Rock, HBO’s The Chris Rock Show, and PBS’s American Masters.

Now this exciting artist has released Harp Town, a full-length album of pop music classics from every era, uniquely arranged for harp and voice, and recorded with intimacy and delicacy by producer Mike Nolan. The album, whose title is a nod to Steve Earle’s 1986 debut album Guitar Town, includes gorgeous and haunting versions of Tim Buckley’s “Song To The Siren,” Smashing Pumpkins’ “Disarm,” Kate Bush’s “This Woman’s Work,” Adele’s “Someone Like You,” Rihanna’s “Stay,” and Radiohead’s “Black Star” as well as such all-time classics as “La Vie En Rose,” “Eleanor Rigby,” “Come Fly With Me,” “Habanera” and many more. Each song features Hill’s extraordinary harp playing and her own distinctive interpretations. “This has been such a big, exciting project for me,” Hill enthuses, “I do a lot of different styles of music, and I write as well, but one of the things I’m most proud of is what I do with my harp and voice covers of pop and rock songs. I started playing the harp when I was 8 years old, and right from the start, I was playing and singing songs that I’d hear and fall in love with. I’m just such a music fan, and I go nuts for some of these songs and artists, so what a joy to get to spend a year working on arranging and playing and singing these songs.” With Harp Town, music fans everywhere will have the opportunity to experience these classic songs as they’ve never heard them before! Available on all digital music retailers from Cleopatra Records.