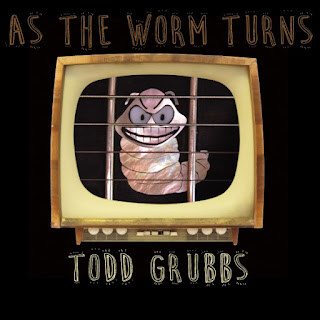 Tampa, FL - Best known for his virtuosic guitar instrumental albums, Tampa guitarist Todd Grubbs will be releasing for the first time a predominantly “vocal” album titled “As The Worm Turns”. Not to fear, you still hear Todd shred on guitar throughout the album, but this time around the tracks are more “song” oriented.

Says Todd, “I have been writing and working on these songs for the last couple of years. I have 2 vocal albums with the band 3 Green Windows but I wanted to do a true solo album with a bunch of different singers. I have really enjoyed creating all of my instrumental CDs but I kinda feel like I have made my statement in that genre, my new goal is to equal my instrumental output with vocal projects.”

The beginning of “As The Worm Turns” features a conceptual piece about a former soldier's personal crises. Todd explains, “The first 4 songs are actually a concept piece about a soldier that begins with him dealing with his demons in mid life (The Man in the Hat). The story then goes back into his time during the D Day invasion (Stay Alive). The Other side of forever is a companion piece to Stay Alive, telling the soldier's wife's experience at home.The 4th song of this mini concept piece is We are one and it is the soldier at the end of his life coming to peace and trying to understand everything he has been through.”

“With a clear soaring tone, Grubbs has the chops to keep the shred heads satisfied but it's certainly not his raison d' etre. More interested in melody and feel than speed, Grubbs knows when to hold back as much as when to fire away.” - Guitar World

Todd Grubbs studied at Berklee College of Music and has been voted 'Most Outstanding Guitarist' at the Tampa Bay Music Awards, as well as winning the 'Most Outstanding Video' two consecutive years in a row. Along with Frank Zappa, Grubbs influences, which can be heard throughout Time, Space and the Electric, range from Steve Vai, John Coltrane, The Beatles, Kate Bush, Jeff Beck, Michael Schenker, Ulli Jon Roth and Adrian Belew.

“Todd knows that chops without good compositions, original arrangements and a good sense of humor lead nowhere, as he has all the goods; he can go anywhere he wants. Todd boasts a big fat juicy tone, chops to kill for and a predilection for a certain hyperactive musical schizophrenia with compositions shifting stylistically on a moments notice.” - Tampa Tribune

Along with the release of “As The Worm Turns”, Todd has 4 videos for this project all available on youtube. “The Man in the Hat” and “Stay Alive” feature Zak Stevens, “Venus is Falling” features Emily Velasco and “We Are One” features John Wesley.

In closing Todd has this to say, “My only real message I wish to impart is my love for creating music, I think I enjoy it more than ever.”

To purchase Todd Grubbs “As The Worm Turns”:
http://www.cdbaby.com/cd/toddgrubbscom
https://itunes.apple.com/us/album/as-the-worm-turns/id1060305013