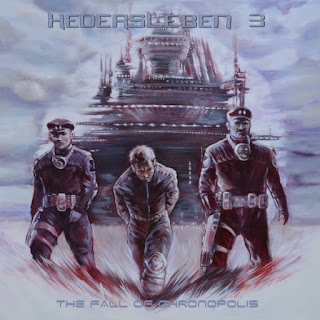 San Francisco - Hot on the heels of their critically second album Die Neuen Welten, Krautrockers Hedersleben will be releasing the progressive rock concept album The Fall Of Chronopolis on November 20 on Purple Pyramid Records.

Hedersleben was founded by former UK Subs guitarist Nicky Garratt in Germany 2011 and has since gone on, along with mainstays Kephera Moon and Jason Willer, to be the backing band for Hawkwind legend Nik Turner on his 2013 album Space Gypsy as well as a forthcoming 2016 album not to mention making special guest appearances on Turner’s newest release Space Fusion Odyssey.

Hedersleben's second, highly acclaimed album Die Neuen Welten featured guest vocalist Kati Knox, and was again recorded at Megasonic Sound in May, 2014. Side A of Die Neuen Welten was set to film by San Francisco filmmaker Erren Franklin. A one-off gig in June, 2014, featured special guest Captain Sensible on second guitar. The show was filmed at 1-2-3-4 Go! Records in Oakland. In August, 2014, Hedersleben took to the road again on a repeat of the previous year’s tour with Nik Turner. Again Hedersleben both opened for and backed Turner.

Hedersleben's third album, The Fall Of Chronopolis is released to coincide with their third national tour, again opening for and backing Nik Turner. The thrilling third album from Hedersleben follows the epic story of the rise and fall of the Chronotic Empire based on the book by Barrington J. Bayley. - packaged in a 6 panel digipak for CD and a gatefold for the vinyl!

The band is schedule for a 5 week tour of the US in support of Nik Turner’s Hawkwind starting in November!

Here's what the press have raved about Hedersleben!

“If you enjoy the atmosphere of 60s psych, with some early Floyd percussion and Doorsesque keyboard work, brought right up to date with modern synth playing and song writing then this album is likely to bring you a great deal of pleasure. Certainly for me it pushed all the right buttons and comes highly recommended.” - Steve Judd, Terrascope, UK

“In the end not only is the music trance-like and hypnotic it's also downright enjoyable, even entertaining. Is it retro or nostalgic? I suppose some might consider it so, but Hedersleben seem to have a very strong grip on the music they wish to create and they do it well.” - New Prog Releases

“The tunes are strong and the artists are all well adept at their craft. Dig prog rock? You will dig this!
4 Stars” - Bop & Jazz (Critical Jazz), USA

“The imposing 'Zu Den Neuen Welten' ideally illustrates this paradox, long instrumental pad 17 minutes looking like a relic unearthed by archaeologists sound. A listen, it's like back over forty years ago with the same sound and the same patina fluffy atmospheres. And it works.” - Music Waves, France

“It's a tranquil end to Die Neuen Welten an album with many ebbs & flows, lots of little nuances popping up that tantalize your senses without trying to do too much but certainly providing enough of a spark to keep you hooked from start to finish.” - Sea Of Tranquility, USA

“The band take the listener into a bath of space rock almost time between 'Space Oddity' by David Bowie, the solo works of Syd Barrett, the epics of Hawkwind and classic albums of Tangerine Dream. For a pageant is a pageant.” - Rock Folk Blues, Belgium

“The band brings you along on a journey through sound and space as they stretch out their sound, which makes Pink Floyd's 'Meddle' sound like a pop song compared to this adventurous piece of music.” - JP's Music Blog, USA