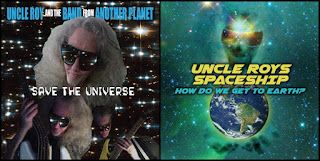 WELCOME THIRD ROCKERS FROM THE SUN!!!
UNCLE ROY AND THE BAND FROM ANOTHER PLANET “SAVE THE UNIVERSE” 5-song EP is the very first release for U.R. and the B.F.A.P and will be released on September 1, 2019. The five, alternative rock-pop rock vocal tunes, range from sweet and ethereal, to a heavy blend of rock, alternative rock, classical rock, progressive rock, power pop rock and modern, pop rock musics. There are wonderful stories in the lyrics and lyrics that will make you feel and think about life. You can hear many different musical influences, within the sounds of U.R. and the B.F.A.P.. “This is all about fun! Enjoy!,” says Uncle Roy. Included with the physical CD is a beautiful 8-page booklet filled with fun, sci-fi stories and thoughts, pictures, song descriptions and lyrics written by Uncle Roy. There is also a cool, inventive and “top secret” alien photo file attached to the CD of Alien Uncle Roy.

WELCOME EARTHLINGS!!!
UNCLE ROY'S SPACESHIP “HOW DO WE GET TO EARTH?” is a 5-song EP and the very first instrumental release for Uncle Roy's Spaceship and will be released on September 2, 2019. The music is a progressive, instrumental recipe of several genres of rock music, blending time signatures and tempos, within instrumental rock, progressive rock, fusion, classical rock, space rock, jazz rock and other cosmic sounds, at this moment in space and time. There is a galaxy of musical influences from many light years of playing, that you can hear within the sounds. Sometimes, the soundscapes will be light and breezy and dreamy. And sometimes, the soundscapes will be heavy, thick and creamy. Some tunes may have a bit of both, with a sprinkling or splashing of other musical textures and moods from soft to intense…Uncle Roy says,“Instantaneously, music finds our emotions and at the speed of light, brings them out! Music, stimulates our imagination! Fun, with music! Enjoy!” Included with the physical CD is a beautiful 8-page booklet filled with fun, sci-fi stories and thoughts, pictures and song descriptions written by Uncle Roy.

Uncle Roy & The Band From Another Planet “Save The Universe” & Uncle Roy's Spaceship “How Do We Get To Earth” is ROY LEONARD HERMAN. All music, lyrics and stories are, composed, performed and written by Uncle Roy. Roy Leonard Herman is the creator of original, multi-genre, styles of rock music from alternative rock to progressive rock and more. When asked, Uncle Roy says: “Music is a vehicle to bring the mind, the spirit, the soul and the body together. Music, inspires our greatest emotions to emerge. Music, inspires millions upon millions of people to enjoy a fantastic moment of living, simultaneously. Music, heals the heart and opens it up to life. Music is, magical! Music is, a state of happiness and freedom! I hope to create music for people of different musical tastes. Some will like vocal tunes and some will like instrumentals. Some will like pop music and some will like progressive music. And, I hope to give them all, some of what they love to hear. It inspires me to do different projects to please everyone I can who loves music. There is a third project, different from these two, that is materializing!”

“SAVE THE UNIVERSE”
Uncle Roy says, “For 'Save The Universe' I wanted to create a set of tunes that were not one style of rock or just heavy or just light. I wanted to have some of the musical ingredients, from several rock stylings, within the scope of the music. I wanted the recipe for this project to be more universal, with a mix of rock genres. Therefore, each tune has its own musical and lyrical difference and character from the others. There is soft guitar and screaming guitar. There are dreamy, orchestral keyboards to, thick, and rockin' keyboards. The drums may lightly and tightly groove for a section of a tune and then, be pounding. The bass will be subtle at times and then, sometimes big and fat. Vocally, you will find the voices of the songs going from the mellow and grand to heavy rock to a little, talk-singin' and preachin'. For every letter of the alphabet, there is a musical influence that has manipulated my musical, genetic makeup, over a few light years. The world's music is broad, cultural, always evolving and it is what influences me musically, as well, all the time.”

The song list:
“COSMIC HAPPINESS” is a fun, alternative pop rocker that begins with a spacey, rock intro, as the cosmic, long distance romance story in the lyrics, unfolds. The tune rolls from a classic, bouncy, rock boogie groove, to a cool, hooky and rockin' chorus.
“THE ISLE OF RIFF ON THE WORLD OF TONE” - this alternative rock tune opens with a tight, soaring rock motif that flows into a sweet, thick and grand alternative rock/pop rock verse. The verse slides into a heavy rock bridge that crescendos into a catchy, power pop, alternative rock chorus. The words tell the story of a peaceful, majestic, utopian world, where everyone is welcome.
“A WORLD OF MIRACLES” is a mellow, beautiful, dreamy, ethereal, philosophical, thoughtful song. With a couple of harmonious, chiming guitars, a pulse, and crisp and bright vocals, the song is filled with fairytale lyrics that create visions about some of the enchanted things we all would love in our lives.
“FATHER TIME” mixes an explosive, rock beginning that, ascends into the verses, as the music takes on the magic and vibe of an old, traditional 'pub' sing along song that evolves into an alternative-progressive, power pop rock finale. The lyrics remind us of the power and importance of, time.
“IT DOESN’T REALLY MATTER” is, an alternative rock tune with a world music vibe. The tune begins with an airy and misty music and vocal section. The song builds into a catchy, pop rock bridge that develops into a thumping, driving, preachin', talk-singin' chorus. The words address the whole world issue of racism, prejudice and equality across the Earth.

“HOW DO WE GET TO EARTH?”
WELCOME TO THE STORY AND JOURNEY OF UNCLE ROYS SPACESHIP!!!
“After trying for a few light years of time, to repair the navigational system of my spaceship, due to a small ice particle smashing into the lens of the interstellar space guiding system, at the nose of this ship, I suddenly realized that my course direction had changed, drastically! None of the constellations or orbiting bodies were familiar. Distant solar systems were out of place in the twilight! The galaxy I was orbiting, was not, the Milky Way! I must have drifted into a wormhole while working on the repair. Which didn’t work. I need a few parts. Good thing is, at least, I found a map of our solar system and the Milky Way under my drivers seat. If I get close to home, it could help. 'Let's see. The map says, 'Map of the Solar System,' 1987..What!?  What!? 1987! Oh man! This map is, ancient! Talk about, lost in space! Hopefully, I'll meet someone out here who knows where I am, where I can get some parts and how I can return home…I guess I'll just play some music while I survey my surroundings and give this galaxy a couple of orbits, so I can get comfy in my new neighborhood..Man! Whatever universe this is, it sure is a beautiful, sparkling place! Navigation by the stars! Oh yeah! I need some drivin' music! Hmmm…Some of my Uncle Roy's Spaceship music will do just fine! One thing about outer space is that, no one care's about how loud or how long you play it! Everybody, everywhere, loves Earth music!!!” The adventure, begins…

Uncle Roy says, “I love instrumental music! From soloists to small groups to orchestral instrumentals, through a variety of music, the dynamic sensitivities within instrumental music makes me feel a rollercoaster of sensations and emotions!!! So, I thought that creating a project of some tunes with the ingredients of a few instrumental rock music genres together, would be fun! Instrumental rock, progressive rock, fusion, spacey rock, classical rock and jazz rock are all a part of the music in, 'How Do We Get To Earth?' There are moments of soft, sweetness and moments of roaring and throbbing sounds. There are cruising, floating rhythms that groove and heavier, driving rhythms that rock. The dreamy and bright soundscape moments will make you drift. Each tune has a different mood, feeling, atmosphere and style from the others.”

The song list:
“SPACE NOODLEIN” is a a fun, screamin', six string, jammin' rocker! The intro starts as a fat drum beat that, leads into a progressive, classical rock section. Followed by a whimsical, ascending then descending musical theme, for that, 'noodlein' underbelly feel, as the music breaks open into a heavy, roaring, rock development.
“MOOONBEAMS AND THE COSMIC BANG” begins with a syrupy, melodious and harmonious guitar melody and sounds, shooting in the background, to the soothing rhythms being played. The music moves suddenly, to a heavy, punchy and crunchy, progressive metal rock passage of the composition and into the powerful crescendo.
“THERE IS NOTHING MORE BRIGHT THAN THE STARS AT NIGHT” is a fusion instrumental that begins with an edgy tension creating tone, into a very cool, smooth cruisin' groove, with light textured keys and tasty, sonic guitar, throughout. The tune bounces sweetly, drifting in to get the fusion ensemble rolling. This tune cruises nicely.
“IT'S A BEAUTIFUL DAY IN THE MILKY WAY” is a beautiful and dreamy soundscape. The song is a pretty, flowing, melodic and rhythmic composition that has a wonderful, warm, serene feeling and quality. The composition makes you drift thoughtfully and imagine. Subtle and sweet orchestration, gives the song its appealing ambiance and mood. Softly, singing guitar notes provide sweet textures and voice. The tune leaves one with a good vibe, inside.
“FLIGHT OF THE ANCIENT ALIEN” is an energetic, progressive rock tune. This tune crescendos all the way from start to finish. The music gives you the feeling of flying with this ancient adventurer. The intertwining guitar melodies, harmonies and pulsating rhythm, from the start and throughout create a soundscape perfect for a sci-fi movie adventure.

I hope those in the universe, hear a little something within one or both of the projects, a tune or more, that touches them in a way that makes them happy, thoughtful, adrenalized and ready to rock the cosmos! I hope, all of you, find a tune or more you enjoy, that uplifts your soul to a state of happiness, helping you to fly to your own inner and outer space, where all the boundaries of the universe disappear and music, fills the air!!!
Cheers and peace always,
Uncle Roy

Check out https://www.uncleroysalienmusic.com/ for all things from UNCLE ROY AND THE BAND FROM ANOTHER PLANET & UNCLE ROY'S SPACESHIP…and become a fan at the website and at the Facebook Page at Uncle Roy's Alien Music, http://fb.me/uncleroysalienmusic.

UNCLE ROY AND THE BAND FROM ANOTHER PLANET “SAVE THE UNIVERSE” & UNCLE ROYS SPACESHIP “HOW DO WE GET TO EARTH?” digital albums are available at the website, https://www.uncleroysalienmusic.com/. and as a Pre-Sale order at iTunes. They will be available at most major on line streaming music services and at most major on line music retail stores, as a digital album and single and as a physical CD, starting on the release dates for each album…