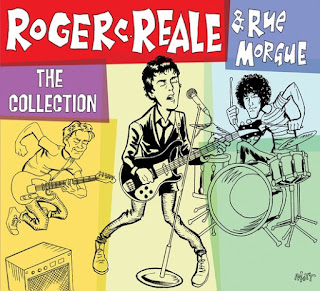 Riding on the punk crest of the new wave movement, Roger C. Reale & Rue Morgue released Radioactive, A 12-track blitzkrieg providing enough octane to power a stock car. After shaking up the lineup (G.E. Smith of SNL fame replaced by Mick Ronson of David Bowie fame), the band began recording their second album, Reptiles in Motion. Conflicts between the record company, the studio and the producer put the sessions to rest. Some 40 years later, the recordings are finally seeing the light of day. Combined with Radioactive, this collection provides the ultimate Roger C. Reale & Rue Morgue experience.

The sound borrows from the Ramones and Johnny Thunders, yet adds enough texture and pop affectations to make it more accessible to the masses. Think power punk mixed with power pop. If Radioactive is a blitzkrieg, then Reptiles in Motion is a more deliberate and sustained attack. Make no mistake, Roger C. Reale & Rue Morgue make the most of each song in this collection. There is little time wasted on prolonged notes, extended verses or spaces between stanzas — the 24 tracks average a modest 3:07 in duration. The blistering guitar and angst-ridden lyrics impose their will with skill and brevity, forcing the listener to react.

It's hard to believe that songs like "Stop & Go" and "Please Believe Me" from Radioactive never hit the mainstream in 1979. We'll leave this mystery up to the documentary makers, but one could easily see these performances blending in between Graham Parker and Cheap Trick on Don Kirshner's Rock Concert or becoming vanguard new wave music videos. The same could be said for songs like "Radioactive" and "No Secrets" on the follow-up, Reptiles in Motion which would have/should have been released in 1980.

All in all, The Collection does not disappoint, and despite 40 years between Radioactive and Reptiles in Motion, the power still surges, leaving the listener revived and energized.
Key Tracks Include: “Stop & Go”, “Please Believe Me”, “Kill Me”, “Radioactive”, “No Secrets”, “Rock it to the Kremlin”.