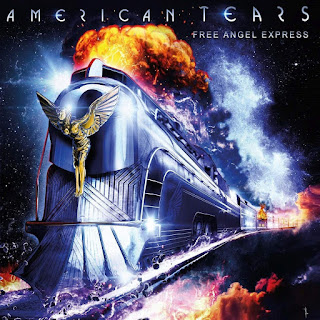 Making their debut in the early ‘70s, American Tears saw low to moderate success with a triple album set through that time period. While Powerhouse became their third and final attempt for some time as a collective band, leader and singer Mark Mangold, went off to explore trying his own musical path with a solo career. Spawning two albums, Mirror Image and Lift respectively, writing a book, and working on various other soundtracks as The Sign, Drive, She Said and one with Aldo Nova of Canada; Mark saw a blossoming period of growth and popularity. In 2019, the band reformed and reorganized to create White Flags, though there seemed to be no signs of surrender from this group in the near future. Now with Free Angel Express, Mark and American Tears are ready to rumble.

“Sledgehammered” is a great introductory recording. The build-up of the keyboard combined with the chanting vocals is thrilling to the listener as the ‘sledgehammer’ waits in mid-air limbo anticipating a sudden drop. The song instead, remains fluid and consistent tricking the ear and mind. “Set It On Fire” begins as a hunt-and-attack-themed piece. Yet, as it plays out the melodic keyboard and vocals reveal a dream sequence. Approaching the midway of the song, the drums play well into the initial beats of the song. It does very well in keeping the listener in a trance.

“Free Angel Express/Resist/Outta-Here” is a 10-minute instrumental track that is soothing, and offers itself up as a bridge between tracks. With the ‘Resist’ part of the track being the driving force, vocally of the track; the title track delivers the impression of an express railroad that the listener is joyriding on. “Not For Nothing” comes through with a different take of heavy rock blended with blues lyrics and melodies. A surprise to the system, “Not For Nothing” becomes a key track without question.

“Glass” projects itself as a contrast to its song title name. As it can be clear and put together, it can also shatter and crumble. Listening, to the ‘perfect storm,’ it’s as though the shattered pieces are blowing against the singer’s face as he battles on to find a resolution. “Everything You Take” finds itself in the aftermath of “Glass,” literally. The two songs marry together so well that the singer feels like he lost this battle either within himself or with someone close to him. “Roll the Stone” is like the perfect resolution of a trilogy, coming to an epic way of understanding of just picking up what remains, and moving on.

“Blue Rondo” plays on as the most interesting and fun pieces on the album. Its clash of organ versus drum is a surprisingly pleasant sound. All the while the combo gives off a jazz/rock/speed-metal triple-blasted sound to spice up and change up some of the energy of the record. “Can’t Get Satisfied” is a blaring, classic-mid- ‘70s-‘80s track that consists of a strong pop element which allows it to act as the album’s presumable single. “Woke” is an organ-dominated track that has both somber and perseverance concepts to it.

“Shadows Aching Karma” starts off exciting with a “Take On Me” keyboard-pop idea. As the song progresses, the synthesizer effects on this track make it a fun and interactive song that is not-so-much an earworm tune but, it does give off an animated cartoon or videogame soundtrack vibe while it plays through. “So Glow” finds itself in a seemingly positive-reinforcement bright song. Although, this song plays out more as a one-liner repetitive instrumental piece that’s massively appealing to the ear (minus a couple crashes in the middle). Finally, “Rise to the Light” begins just as the title might give way to, in a church-type setting. With the organ beaming loud, Mangold’s voice is bold and largely singled-out apart from the supported instrumentation. It is a refreshing and cool way to end an album that energizes and has the listener’s ear busy from start to finish.

Free Angel Express expels a great deal of energy and vibrato to capture its audience in a melodic, keyboard-rock rush. While few tracks fall slightly short of keeping the momentum booming (i.e. – “Roll the Stone” and “So Glow”), the album shines with genre experimentation and blending. Furthermore, the band’s revival might just land them on solid ground throughout the 2021 new year, should this album get the recognition and consumption it deserves by rock, pop, and metal enthusiasts alike.