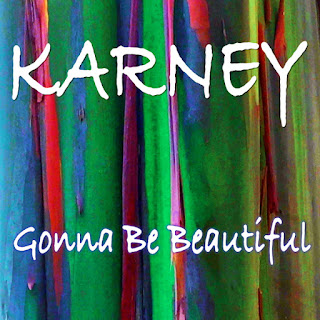 San Francisco, CA – Throughout her storied music career, Anna Karney has performed across the country and released an incredible catalog of chart topping and critically acclaimed singles, EPs, and albums. Now with her San Francisco-based band KARNEY is set to release GONNA BE BEAUTIFUL on February 18, 2022, an exciting new collection of KARNEY originals along with some freshly conceived versions of old favorites.

GONNA BE BEAUTIFUL was recorded at East Bay Recorders in Oakland, CA, and produced by Anna Karney and Michael Rosen (Rancid, Tesla). Featured performers include Bill Ortiz (Santana, Tony Toni Tone) on trumpet; Jim Bogios (Counting Crows) on drums; James Deprato (Chuck Prophet Band) on guitar; Kevin White (Chuck Prophet Band) on bass; and longtime Karney band drummer Jeff Herrera. Offering a message of hope in uncertain times on the title track “Gonna Be Beautiful,” Anna Karney encourages her listeners to not get discouraged and to keep moving towards a kinder, inclusive, and happier world as she sings “Turn on the light / Keep the vision in plain sight / Bring it all into focus.” Also coming soon is an official music video for the track to be released later in 2022.

Keeping her mind on social justice and positive messages, Anna Karney’s lyrical content offers a sardonic and sometimes straightforward approach to many of the issues facing people today. Her musical influences include Bob Dylan, Neil Young, Patti Smith, John Lennon, Sheryl Crow, Chrissie Hynde, and Joni Mitchell. As an arranger, pianist, and guitarist, she has worked with artists such as George Clinton, Linda Perry, and Dennis Bovell.

Songs from the last KARNEY EP release Better received stellar airplay on Triple-A and Americana radio stations, including the title track and her powerful cover of “Ramble On,” one of Anna Karney’s favorite Led Zeppelin songs. She then released a series of singles throughout 2021, including her personal and heartfelt original track “Be Together,” and a cover of the Neil Young classic “Heart Of Gold.”

To create the “Be Together” single, KARNEY band musicians worked from individual studios to assemble their parts and build the track. Singer/guitarist Anna Karney, bassist Kevin White and guitarist James DePrato all recorded tracks at their own home studios. Drummer Jeff Herrera created rough drum parts in his rehearsal studio and sent them to trumpet player Bill Ortiz, who then recreated them digitally. All the tracks were then sent to producer/mixer Michael Rosen, who finished the mix at his East Bay Recorders studio. Ironically, even though the single is titled “Be Together,” the musicians never were.

Anna Karney has had a diverse musical career, having spent many years composing music for games such as Star Wars Galaxies, Monkey Island IV, Armed and Dangerous, several SimCity titles, Metal Dungeon, Death Jr., and many more. She received the esteemed “Dreamcatcher” Award from the Visual and Performing Arts division of the San Francisco Unified School District for her work as a choral teacher and conductor for middle and high school students, as well as her contribution to the furthering of music education in the San Francisco public school system. Additionally, Anna Karney has scored ballet and modern dance pieces as an artist in residence at Mills College and San Francisco State University. She also composed her Opus 1 Chaconne Sur Sept for nationally renowned contemporary music group Earplay Ensemble.

The KARNEY band has enjoyed several open-air concerts during Covid, giving vulnerable and at-risk populations the opportunity to enjoy live performance in a safe and relaxed way. Stay tuned for more live performances in 2022!

Visit the KARNEY website for more information: www.karney.org or https://karney.bandcamp.com

To order or stream GONNA BE BEAUTIFUL on digital services please visit: https://smarturl.it/KarneyBeBeautiful

For Press and Interview inquiries please contact Billy James of Glass Onyon PR at (828) 350-8158 or glassonyonpr@gmail.com