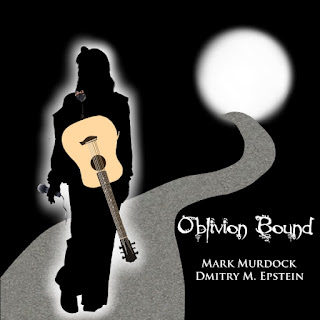 Out on October 30th via Bandcamp, “Oblivion Bound”: the first full-length collaboration between Mark Murdock and Dmitry M. Epstein

The eve of Halloween 2021 sees the release of “Oblivion Bound”: a concept album, devised by Dmitry M. Epstein on Mark Murdock’s request, a record which tells a story of a rock star who dies and is given a second chance to live - provided he can change and get cleansed through his love, his only constant on this mortal coil - but what if he returns and no one remembers his name? It’s a story of Orpheus and Eurydice turned inside out and upside down, with a possible happy end – recounted over the background blending hard-rock vigor and prog sophistication and set to a string of highly memorable melodies.

The joint project of Japan-based American Murdock, famous for his part in Peter Banks’ Empire, and Canadian Epstein, a music journalist and a runner of the “Let It Rock” website (dmme.net), who followed the veteran’s career and reviewed albums he released with such ensembles as Cymbalic Encounters and Masheen Messiah, started in early 2021.

Perceived initially as a Murdock record, “The Game of the Name” – this is the opus’ original title – turned into a duo’s one once Mark asked Dmitry to come up with a concept which would run through all the songs they planned to write. The latter obliged, even though he had never penned a narrative-based lyrics, as opposed to image-driven words, and the former sketched out demos to be fleshed out by artists often present on his discs. Thus, The Id’s Tim Pepper became the voice of “Oblivion Bound” and NEKTAR’s Ron Howden shared drumming duties with Murdock, while Fernando Perdomo, his colleague in The New Empire, and his son Preston are but two of the guitarists featured on the album.

While the record was being prepared, Dmitry co-wrote two songs on Mark’s Atomic Rooster tribute, Nuclear Bird’s debut “Tyrannical Megalomaniac,” and Mark finished and has just released his new solo CD, “Visitors from Another Planet.”

Says Mark Murdock, “Based on the creative writing of Dmitry’s reviews, I felt he was the right person to approach about doing a concept project with. In this project the lyrics were written after the music, but perhaps as follow up we can reverse the process.”

Adds Dmitry M. Epstein, “It was a gripping experience directing Mark’s music as well as being directed by it. The result of our efforts is open to interpretation, but don’t hurry to jump to conclusions just because the end of this story might have to be written yet.”

The album is available for streaming and download at: https://markmurdockanddmitrymepstein.bandcamp.com/
and will also soon be made available on all digital platforms.

All music composed by Mark Murdock,
except Song 9 which was composed by Preston Murdock
Lyrics by Dmitry M. Epstein