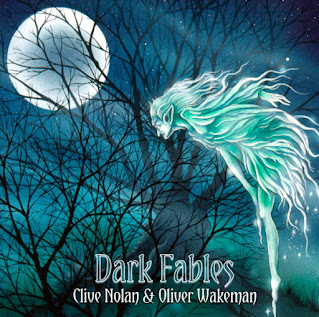 The set also includes unused pieces from their “The Hound Of The Baskervilles” album; “The Man Called Sherlock”, which was the original version of the “Overture”, and “221B”, inspired by Sherlock Holmes’ famous address in Baker Street. In addition, the release also features Rick Wakeman narrating the “Jabberwocky Poem” in full, a perfect way to round off the twists and turns of another Nolan/Wakeman project!

Clive Nolan (Pendragon, Arena) and Oliver Wakeman (YES, Strawbs) first combined their considerable keyboard and compositional talents to create the two aforementioned rock opera/concept albums in 1999 and 2002. Peter Pracownik was the creative behind the original “The Hound Of The Baskervilles” artwork 20 years ago and has employed his talents again for the sleeve of “Dark Fables”.

You can listen to the single release, “Why Do You Hate Me” on Oliver’s YouTube channel:

1 The Overture
2 I’d Give You Anything
3 The Mirror
4 Elizabeth
5 Why Do You Hate Me?
6 The Wedding Approaches
7 Time Passe
8 A Descent Into Madness
9 221B
10 The Man Called Sherlock
11 The Baker Street Irregulars
12 The Jabberwocky