The Blast That (Will Be) Heard Around The World! “San Fernando Blast” Sandy McKnight w/Fernando Perdomo 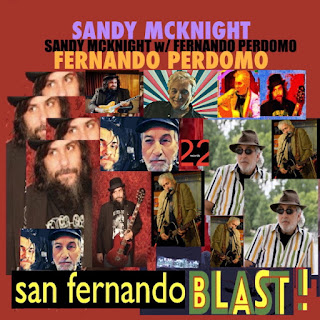 All this downtime, staying home, collecting stimulus checks, has affected the world of music. Musicians are rehearsing, songwriters writing, and recording studios are busier than ever. Add that to the fact that entire records can be made remotely, and the virus has generated a new golden era for original music.

Which brings us to the story of one such project/band/duo, Sandy McKnight w/Fernando Perdomo. The story of the “San Fernando” series of releases began in 2019, when artist/studio musician/performer/producer Perdomo met songwriter/musician/producer/author McKnight at a session at Reseda Ranch, Fernando's L.A. studio. Some months later, Sandy returned to the left coast (from his home base in the Berkshires of Western Massachusetts), and booked a few hours to record one of his power pop tunes.

Then, as they worked, they suddenly realized they had a certain magic together - Perdomo on drums, guitars and keys, McKnight on bass and vocals. After that session, the virus intervened, and all travel options became temporarily, well...not an option. But the World Wide Web allowed for the speedy travel of bits and bytes on the information superhighway, and so the boys continued to groove long-distance.

They completed a 6-song EP, “San Fernando Beat”, and released it in the spring of 2020. The reviews were rapturous, and the boys knew they'd hit all the right pop targets. Reviewers were familiar with Fernando, from his many solo albums in the Prog world, his participation with Jacob Dylan in the documentary “Echo in the Canyon”, and his ubiquitous session work. But Sandy was something of an unknown, flying under the radar in a number of semi-successful bands in New York. His solo recordings were used in many TV shows and movies, so chances were they'd heard his work without hearing his name.

In combination with Perdomo's musical skills, McKnight's hook-laden tunes came to life. And so, when 2020 came to an end, PowerPop News named “San Fernando Beat” the top EP of the year! But the pair was just getting started.

In early 2021, a second EP, “San Fernando Blitz”, was released to wide acclaim, including a glowing review in American Songwriter magazine. And PowerPop News, who'd named their first EP the best of 2020, said incredulously, “this one's even better!”

Which leads us to the "band's" first full-length album, “San Fernando Blast”. They took the 12 songs from the 2 EPs, added 3 new recordings of McKnight originals, and voila! A 15-song tour-de-force that may actually be even better than the sum of its parts. They've created a cohesive soundscape by sequencing the tunes with a fluid listening experience in mind, they may have done the impossible: made a 'greatest hits' album that makes sense as a continuous listen. While each song stands on its own, they are even more fun together!

Their manifesto said “The concept was thus: create a 15-song album of power pop/pop/pop-rock recordings, each of which sound unique, yet hold together as a single work by an identifiable performer/artist. Ideally, the songs should be under 3 minutes (2 went longer), with killer hooks and simple production. I think we pulled it off!” Ambitious, yes. Mission accomplished? YES!

Now their job is to get the world listening. They're pretty sure that once heard, “San Fernando Blast” will be your favorite pastime. And as the 'Bandemic' winds down, those in the know will undoubtedly start talking about this dynamic duo who can do it all...15 hook-filled hits, magical musicianship, prodigious production, and the immeasurable passion for music that separates these two from the crowd. Social distancing? More like sonic distancing, as McKnight and Perdomo move ahead of the pack. 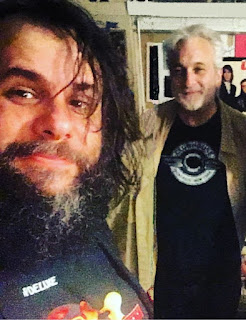