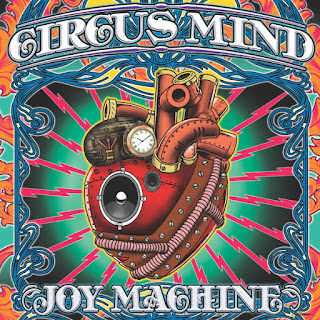 New York, NY – CIRCUS MIND is a New York-based rock outfit and the brainchild of ringleader Mark Rechler. The band is entering their twentieth year and are soon to release their third album JOY MACHINE, a fresh explosion of sounds and flavors of the ’70s rock era with a modern twist. Like a three-ring circus, the band can slide seamlessly between rock, funk, and swampy N’awlins grooves, all while referencing some of the best bands of that era with infectious hooks that get stuck in your ear hole. JOY MACHINE releases May 21, 2021, and also features Nels Cline, Marc Ribot, Ivan Neville, Walter Wolfman Washington, Scott Metzger, and more.

The first JOY MACHINE single “Are You Ready?” features guest guitar phenom Brandon “Taz” Niederauer and had an official music video release. Both the song and video are a funky rock throwback that has roots in P-Funk, Sly Stone, and other ’70s rock and soul vibes, all flavors that CIRCUS MIND wears on its sleeve as a badge of honor, from the writing to the production. The title track “Joy Machine” features Scott Metzger (JRAD) and releases as a single on May 7 with a special music video premiere. CIRCUS MIND will then gather together in New Orleans with some amazing NoLa musicians including Big Sam to celebrate the JOY MACHINE album release on May 21 with a raucous party and live performance!

The production of JOY MACHINE began in August of 2019, but it was the Covid-19 pandemic that really set the stage for the record. While some bands took to the internet airwaves to stream performances, Rechler locked down in the studio. “Suddenly we had a ton of time on our hands and we knew we wanted to come out of this with a full album,” says Mark. “I was a man possessed and started writing like a madman!” The band started working remotely but quickly masked up and got down to business. “In a weird way, the pandemic also opened doors for us to find such amazing guests who were not out on tour and were looking to keep busy.”

The previous CIRCUS MIND release Silver Flower was voted Best Indie Album of 2006 by Newsday and put a modern take on influences such as Traffic, Steely Dan, Little Feat, and Mott the Hoople while mixing in NoLa vibe influences like Dr. John, The Meters, and The Neville Brothers. The last CIRCUS MIND single “Jazzfest Time” was released one year ago as an ode to the New Orleans Jazz & Heritage Festival and featured Ivan Neville and Big Sam. CIRCUS MIND is quite versatile and has opened for national acts (Toots & The Maytals, The Neville Brothers, The Radiators) and had many notable guests sit in on their recordings and live performances (Soulive, Rebirth Brass Band, Cyril Neville).

CIRCUS MIND’s members are diverse in their influences as well as their playing. Lead vocalist, songwriter, keyboardist, and bandleader Mark Rechler plays in multiple bands (such as Falling Water), and has played, toured, and recorded with members of The Meters, The Neville Brothers, The Radiators, Soulive, The Brandon “Taz” Niederauer Band, Rebirth Brass Band, Ivan Neville, and more. Spending five years in New Orleans studying music and architecture helped influence his style and direction, and he always keeps his focus on the hook to keep his listeners wanting more and humming his tunes all day.

Bassist Chris Crosby has a serious case of spider-fingers and can solo as beautifully as any guitarist. A funkster from a family of highly respected musicians, Chris has also studied with Oteil Burbridge of The Allman Brothers Band and Dead & Company. Currently, he has also been busy playing in his brother’s Jason Crosby Band and with New York rock quartet Feverseed. Guitarist David Berg is rooted in jazz, reggae, and bluegrass. He has toured with Dark Star Orchestra and has played multiple shows with Garth Hudson (The Band). Dave’s fluid rock style keeps CIRCUS MIND in a constant snake-like flow.

Drummer Dan Roth has been banging on things since he was a tyke, and he can’t seem to stop. He’s addicted to crosswords, motor coordination, and avocados. With over 30 album credits to his name, percussionist Steve Finkelstein has worked with pop icons from Ray Charles and Mariah Carey as well as jam band giants including members of the Grateful Dead, The Allman Brothers Band, and Tower of Power. Steve is also an original member and current member of the Funk Filharmonik.

To watch the official music video for the new single “ARE YOU READY?” please visit:

For more information about the band and the New Orleans Release Party on May 21 please visit: www.circusmindband.com