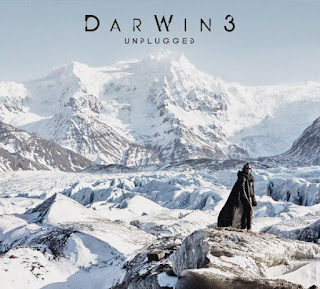 DarWin first grabbed attention with the epic 17 track double album “Origin of Species” in 2019. It won over fans and critics alike with its mix of virtuoso playing, heavy guitars, and symphonic rock, co-produced by Simon Phillips. The punchy follow up album “DarWin 2 : A Frozen War” took the concept a stage further, adding musicians Billy Sheehan, Guthrie Govan, Greg Howe and Derek Sherinian to the mix.

Now comes “DarWin 3 : Unplugged,” a collection of orchestral and stripped back versions of tracks from the first two albums.

Highlights range from the sweeping instrumental takes of “Escape The Maze” and “The Last Chance” recorded at Abbey Road Studios, ”Nightmare of My Dreams” recorded in Iceland, to a poignant acapella version of “Another Year.”

The album, once again produced by Simon Phillips (Toto, The Who, Santana), features DarWin (guitars), Matt Bissonette (Elton John, Jeff Beck) on bass and vocals, The Chamber Orchestra of London, and The Reykjavik Quartet across its eight tracks. Phillips also adds his signature percussion and effects to the album.

The songs first appeared as a bonus addition to the limited edition “DarWin 2 : A Frozen War” double vinyl LP, and are now being given a stand-alone release in “DarWin 3” on April 16th 2021.

DarWin says, “Upon completing our first and second albums, we quickly realized that completely different interpretations of the songs were possible by isolating the strings or acoustic instruments as much as possible. Indeed, they sounded like completely different songs, although the fundamental concepts and spirit of the songs remained intact. Simon went to work on doing new mixes with the exact same instruments and tracks from the recordings in the earlier albums to create these ‘unplugged’ versions of the songs. Matt Bissonette also recorded two new solo versions of ‘Slowly Melting’ and ‘One Horizon,’ with just his voice and bass.  Simple and pure. ‘Slowly Melting’ was recorded on a live take with the voice and bass parts simultaneously. Many of these songs were deeply emotional journeys, and that character tends to shine through in these unplugged versions.”

DarWin’s critically acclaimed debut “Origin Of Species” was the first instalment in an epic saga that addresses the challenges of mankind in our coming era. It depicts the role of a changing planet, and the potential, as well as limitations, of technology to help solve mankind’s greatest challenges. A complex project that eschews the hollow immediacy of much contemporary art. A story that demands attention and imagination. With music sweeping in scope, at times evoking hard rock virtuoso shredding, alongside grand orchestral compositions, warm harmonies and soaring choruses. A project that is even more relevant in the strange times we live in. Classic Rock praised it on release “At the end of it all, DarWin has saved the concept album as well as the planet.” Prog Magazine compared it to “Dream Theater at their most melodic meeting a harder-edged Toto.” 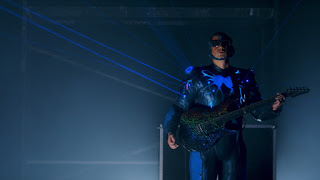 Second album “DarWin 2: A Frozen War” picked up rave reviews across the board:
“A rock tour de force with melody, shredding, and orchestral flourishes” - Progrock.co.uk
“Near perfect prog, 9/10” - Powerplay
“Highly interesting and mesmerising” - RRRR Rockunited
“Wow! More please soon!” - AORMusic
“A triumph” - At The Barrier Magazine
“A progressive rock album that is crafted, polished and at times simply breathtaking in its composition” - The Razor’s Edge