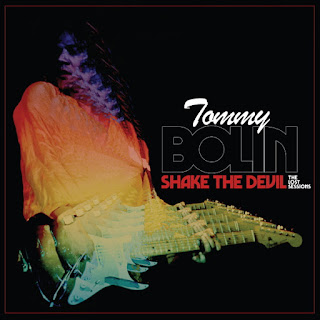 Los Angeles, CA - This year will mark the 55th anniversary of the passing of Tommy Bolin, the supremely talented guitarist and songwriter, best known for his work with Deep Purple and The James Gang, who captivated the world with his sophisticated and ferocious playing. Bolin’s tragic death, he was a mere 25 years old, has been one of rock music’s great “what ifs” forcing critics and fans to grapple with what Bolin might have been able to accomplish in subsequent years were he still alive, given that he managed to produce such amazing works of mature artistry at such a young age. Many point to Bolin’s most fully realized, and sadly final, album, the magnificent Private Eyes, as proof that for all of Bolin’s success, the man was just getting warmed up!

Now a new collection of never before released outtakes and demos from those recording sessions will be released showing the many sides of Bolin’s talent. The collection is called Shake The Devil - The Lost Sessions and will be released on February 12 courtesy of Cleopatra Records. Licensed directly from Bolin’s estate and with informative liner notes from rock journalist Dave Thompson, these recordings offer both acoustic, instrumental and alternate versions of some of Bolin’s best known tunes including his most popular song, “Bustin’ Out For Rosey.” That track is today offered as a special sneak preview of the album, which will be available on both CD as well as a gorgeous gatefold vinyl with your choice of white, purple or red vinyl!