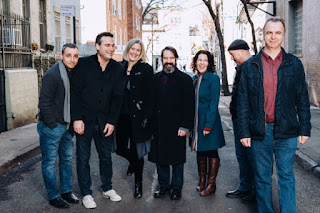 IZZ began the writing sessions for what would become their 7th full length studio album, Don’t Panic, in mid-2017. At the end of that year, the band got together in a rehearsal studio to piece together the centerpiece of the album, “42.”

The band hired a film crew to document these sessions not knowing in what manner the film might be used later on. The result of these sessions, 42: Glimpse of a Moment is a 48-minute documentary that provides a unique window into the band’s process as they write, arrange, and rehearse their epic track from Don't Panic, “42.” The documentary includes a full rehearsal run-through of the entire song at that early stage of development.

42: Glimpse of a Moment is available now for purchase (download and streaming) for $4.99 via Vimeo On Demand here: https://vimeo.com/ondemand/42glimpseofamoment and linked on the IZZ website (www.izzmusic.com).

“The footage in this film was shot several months prior to commencing the recording of Don’t Panic, so it’s really exciting to have captured the band working together in the studio at such an early stage in the writing and arranging process,” notes bassist John Galgano.

Don’t Panic, released in May 2019, turned out to be IZZ’s most successful album to date and when the band looked back at the footage from these sessions in late 2017, they found that they had captured the essence of the collaborative spirit and camaraderie of IZZ.

“I think IZZ fans will absolutely love this look behind the curtain and I think fans of progressive rock in general will enjoy it because it’s just an interesting peek into how a band works on an extended piece of music,” says keyboardist Tom Galgano.

IZZ hopes that fans will enjoy the experience of being a fly on the wall with the band.

Film and editing by Mallory Kinney, who has previously worked with IZZ and Laura Meade on the videos for Don’t Panic and Sunflowers at Chernobyl.

Watch the Trailer for 42: Glimpse of a Moment here: