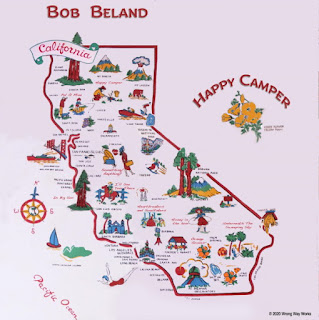 BOB BELAND is an American born musician/songwriter from Los Angeles, CA, where he has performed, written and recorded original music from 1974 to the present. He is releasing his 8th album “Happy Camper” on June 30th on the Wrong Way Works label. The music reflects upon his experiences living and performing in California since 1967.

Beland recently collaborated with 10cc legend Kevin Godley on a song that will be released on Kevin's first solo album “Muscle Memory “ in December 2020. The collaborative track “Big Bang Theory” will be released as a single in August 2020.

BOB BELAND - “Happy Camper”
As I was assembling the songs for my 8th album, “Happy Camper,” I started to see a theme develop. It was a personal travelogue of sorts about my time here in California. I came to the Golden State by rail via the Santa Fe Super Chief with my Mom, Dad, five brothers and one sister. We arrived in Los Angeles in 1967. From that year on I would spend time and play music both in the Northern part of the state in San Francisco from 1970 to 73 and then back down South to Los Angeles in 1974. These songs reflect upon those experiences either directly, as in ‘Big Sur,” “I'll See You There” and “Orange Groves,” or indirectly as with “Honey In The Hive,” “Underneath The Sweeping Sky” and “Pal O' Mine.” “Heartbreakers and Soultakers” main storyline revolves around a pair of young people from different ethnicities venturing out into the nightlife of club land. In the song there’s also a hidden reference to a certain famous band and their leader's A.K.A. if you listen closely. For “Something/Anything?” I had this driving acoustic rhythm guitar riff happening but I needed something lyrically to fit it. For some unknown reason I thought of Todd Rundgren's great double album “Something/Anything?” and realized that he hadn't any song on that album or anywhere in his catalog and the phrase fit perfectly so I hope he's not offended by my 'borrowing' it.

The title track , “Happy Camper.” came as a surprise to me as I had no intention of writing a song with that title. I had it in mind only for the album title two thirds of the way through when I suddenly became ill in February 2020. While recovering, the lyrics of the song came to me fast. So fast that I felt more like a stenographer taking notes than a songwriter. A melody came as soon as I reviewed what I had written but it took another 3 days for me to feel good enough to go into the studio and put it to music and the piano. The music came together very quickly as well. This song didn't come to me in a dream. It came to me in the middle of the day while I was sick and anything but alone with my thoughts in a busy family household. However, what I did feel was the presence and words of my mother and father, who had passed away decades ago, coming back to me and whispering into my ear. I was listening to the spirits from long past and it was an intense but beautiful feeling of resolution. I hope those who listen feel the same way I did.

Now, a little background on the players who contributed their time and talents to “Happy Camper.”

Bob Gross is someone I’ve known since the early 1970’s. Among the other acts he's worked with was Delaney Bramlett of Delaney & Bonnie fame, Bob Wier's Jemima Puddleduck and currently can be seen and heard gigging with the Deanna Bogart Band. Richard d'Andrea is a friend and former Furys alumi who's been a mainstay in the L.A. rock scene since the 70's most notably founding the Know with Gary Valentine and working with musicians such as the Roosters and Carla Olson. Marty Korth is a long standing friend of mine who also spent some time in the Furys and has played bass on other songs that I've written and recorded over the years. Greg Embrey is also from the Furys. Smokey Fennell is Canada's “most OK est” steel guitarist according to Smokey. In classic Canadian humility he actually is a much in demand musician who can be heard on the British singer/songwriter David Gray's smash it, “Babylon,” as well as on two of Gray's best selling albums. Paula Kuhr is a classical violinist who has performed on two of my albums before this one. She is a member of the MESTO orchestra who perform worldwide.

I hope you enjoy the musical travelogue that is my 8th solo album, “Happy Camper!”