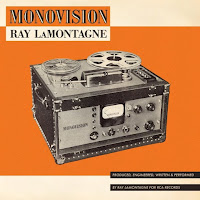 Roll me, Mama, Roll me," the first track on Ray LaMontagne's new release, MONOVISION rolls over the listener like a cold wave on the hot sand. It's an enchanting blend of his old bluesy-folk stylings and his more recent airy and subdued vibe. Fervent vocals ride upon the lush and layered hooks The breathy and soulful intonations deeply enrich the underlying vibe throughout the entire album. Let's face it, the most lasting impressions of a musical artist are typically formed based on the first album one hears from that artist. My introduction to Ray Lamontagne was 2016's slow-burning Ouroborus. Traveling back in time from there, I came to appreciate his earlier folk-ified country offerings. In recent releases such as 2018's Part of the Light and the aforementioned Ouroborus, LaMontagne has slowed his music pace. Yet on MONOVISION, he seems to have brought back a bit of the old down-home sound and blended it with his newfound airy vibe. "Misty Morning Rain" starts slow and intensifies. Reminiscent of the livelier songs from Van Morrisson Astral Weeks, the staggered rhythm and textured strumming makes it nearly impossible to sit still. As one of the better songs on the album, LaMontagne, as always, reveals the pain in his soul through his profoundly expressive voice. "We'll Make it Through," and "Strong Enough" are two other strong tracks that set the mood as inspiring, if not feathery anthems of the day. While the enthusiasm is infectious on most of these songs, the album is not without a few sedatives. "Weeping Willow", "Highway to the Sun," and "Summer Clouds" are as slow as molasses. They, too, serve as a sign of the times as we've all been forced (arguably for the better), to turn the cadences of our own lives down a few notches. Overall, MONOVISION is a quintessential Ray LaMontagne record. His subtle and soft guitar tones underscore an organic uprising of his deepest thoughts and feelings. A marriage of the old with the new results is an evolved and original listening experience. - Tom Endyke | Guitar & Pen