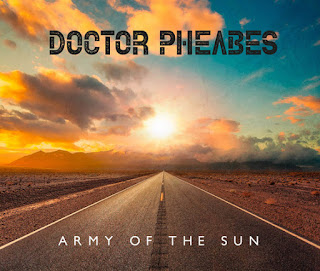 Brazilian rockers, Doctor Pheabes is back with their third album, and first international release, Army of the Sun.  On the hard rock spectrum, they take up a lot of space, sitting somewhere between AC/DC, Bon Jovi and Pearl Jam.  Two pairs of brothers, Fernando and Eduardo Parrillo and Fabio and Paulo Ressio work their familial bonds into the strength of their music.  After just one look and listen you’ll know their crisp, industrial, jagged-edge sound didn’t just happen overnight.

Over the years, Doctor Pheabes has honed their sound into something that, on the surface seems like polished classic rock, yet the deeper you listen the more texture and complexity you find.  The music is a composite of ‘70s hard rock, ‘80s flash, and ‘90’s alt-rock. Doctor Pheabes are a hard rock history lesson unto themselves.

Army of the Sun starts with a bang. The title track is a rocking foot-stomper that could be played at any sports arena to get the crowd pumped.  “Better off Alone” sounds more like a Nirvana song with a fast/slow/fast tempo, yet steeped in classic rock roots.  Like the tempo within their songs, they slow things down effectively on tracks such as “Ask of You,” and this reviewers favorite, “Live Forever”.

As torchbearers for the New Classic Rock movement, it is hard not to borrow from one’s influences.  The danger is sounding unoriginal and in places Army of the Sun does.  Lyrically, there is not much here you haven’t heard before.  One could argue that for anthem rock, it is best to stick with the formula.  Turn idioms into song titles and fill the lyrics with rhyming couplets.  Still, it is a successful formula and Doctor Pheabes uses it well.

If you’re looking to rock out for a spell, you won’t go wrong with Doctor Pheabes’ Army of the Sun. These songs are accessible, enjoyable and the guitar work by Fernando Parrillo is outstanding.  Knowing you’ll hear a stellar guitar solo on each of these songs is cause enough to have them in steady rotation in your playlist.