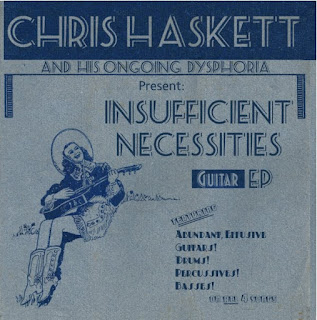 Chris Haskett is a Grammy-nominated American guitar player mainly known for his time in the Rollins Band in the 1980s and 90s. After eight albums, Chris is releasing an instrumental EP of original tunes, “Insufficient Necessities,” primarily featuring his European band (Mike Baker of DC go-go band Rare Essence does bass duties on the opening song “Going Back”) on November 15, 2019. The emphasis is decidedly on funk with nods to Chris's hometown go-go scene as well as New Orleans second-line grooves.

As on his other releases, Chris looks to strike a fragile balance of technique, tonal color and letting “interesting accidents” find their way in to the music. He wears his influences on his sleeve, and echoes of Beck, Ribot and Richard Thompson all peek through at various points. As he says himself, “I think I like things to teeter between being fluidly funky and a little fractured too.I'm hard to categorize because I straddle a kind of venn diagram/middle ground where hard rock meets downtown avant garde (with a little bit of 'Dark Star' sprinkled on top).” 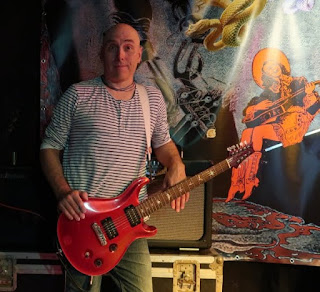 Most of Chris's early life was spent in Washington DC though, by chance, he was living in the UK just as punk was breaking in 1977. The rule-breaking freedom offered by punk had a profound influence on him and remained with him on his return to the US in 1978. His first band, the Enzymes, synthesized diverse influences from both the early punk/no-wave scene as well as the avant-garde and free jazz musics of the time. This overlap of influences reluctance to be pigeonholed has been a constant throughout his career.

Moving back to England in 1980 brought him into collaborations with the Birthday Party's Rowland S. Howard and for Public Image bassist Jah Wobble. It was also during this time that he reestablished contact with old DC friend Henry Rollins who was then singing in Black Flag. When Black Flag broke up in 1986, Rollins immediately suggested they do a project together. The result was the genesis of the Rollins Band. Over the following ten years, the band became known for uniquely powerful, uncompromising hard rock that spanned and yet stood apart from both the grunge and metal scenes of the era. After ten albums, a Grammy nomination and nearly a thousand concerts across the globe, the band members decided to part ways in 1997.

Even in the midst of the Rollins Band's punishing schedule Chris found time for instrumental side projects. In 1995 he released “Language,” a mix of angular acoustic guitar pieces and musique concrête that also featured duets with Rowland S Howard. 1997's “Non-Fiction” was a collaboration with Chuck Brown and the Soul Searchers drummer Brandon Finley. This electric guitar album incorporated DC's signature go-go beats alongside a clear influence of both Zappa and Sonny Sharrock. The subsequent releases, “Not Part of the Solution” (2002), “The Return of the Geary Act” (2004), “Maybe Definitely” (2012), “Gravity:Left/Right” (2013), “The Courage Born of Conflicting Terrors” (2014) and last year's “Comprovisations in Linear B,” all defy easy categorization but share a distinctive musical sensibility: funky, angular, lyrical and unpredictable.

In 1999 Chris was hired by David Bowie who said he was looking forward to Chris's “nose bleedingly hostile” guitar to complement Reeves Gabrels for an upcoming tour. The planned tour got sidelined but Chris can be heard alongside Reeves on Bowie's “Hours” album.

Aside from numerous concerts fronting his own bands in the US, Europe and Australia, some of Chris's other touring and performance credits include Steven Brown (Tuxedomoon), The Cassandra Complex, Elliott Sharp, Reeves Gabrels, Pigface, Chris D (Divine Horsemen), Utah Saints, and Foetus.. More recently he has been invited as onstage to perform with Helmet as well as MC50.

Chris divides his time between the US, Europe and Australia and is currently working on a percussion-heavy psychedelic live band.

“I first heard Chris Haskett with the Rollins Band, surely one of the most powerful of late 80s bands, and was instantly struck by the intelligence driving the molten guitar tone. What a pleasure to come to know his wide-ranging solo works, spanning the gamut from fun and impressively detailed electric workouts to truly thought-provoking and meditative acoustic compositions. Chris makes guitar music anyone can feel good about obsessing over.” - Mike Keneally

“Chris Haskett !!!!! Love the mans work all the way from Henry Rollins to the present.” - DeWayne Blackbyrd McKnight

“Chris is a gifted musician and guitarist who should be followed as the music he is involved with is real and engaging.” – Paul Reed Smith

“He’s always seemed to effortlessly cross genres with an authenticity and honesty that few are able to match, even in one genre. From punk to jazz, experimental to funk, he brilliantly manages to weave everything together on his albums. He’s like the perfect marriage of Snakefinger and Jeff Beck and a little Ornette Coleman.” - Rich Fortus