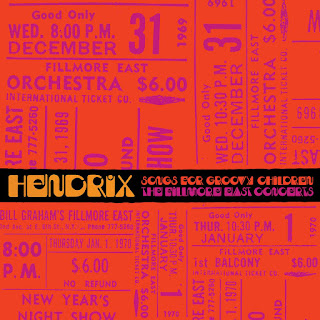 Come one, come all. Groovy children unite! Today we are talking about the king of guitar himself, Mr. Jimi Hendrix. His record company recently created a tribute box set called Songs For Groovy Children, which includes his classics and unreleased live performances across five CDs. The best part about live albums is that the artist can’t hide behind the vocal effects. There are no retakes, no breaks, and no time to think things over. It’s just the artist, the audience, and 10 feet in between.

Disc one is comprised of songs that we’ve heard before. “Lover Man” has an iconic riff that makes you wonder how someone’s fingers can move that fast. The smooth transitions in this song between sections and the sound quality of the electric guitar are crazy good. He pulls out all the stops with the tremolos, pickups, and loads of vibrato.“Bleeding Heart” takes us down south with soulful vocals and the bluesy bass line. It's the kind of song that you expect to hear in a dimly lit cajun-themed bar. “Izabella” has a lot of flavor to it. You don’t even have to like rock music to appreciate the raw talent of Hendrix’s playing.

Disc two has the bulk of new/remixed songs. “Changes” comes up on four of five of the CDs. Each version has a unique sound to it, almost like how a filter changes the tone of a photo. We also see different variations of “Stop,” “Power Of Soul,” “Machine Gun,” and a few others. “Auld Lang Syne” starts with a clip from the original song. The crowd goes wild as Hendrix starts to play his version of the song on guitar. The concert took place on New Years' Eve/Day, so it is fitting to include this one in the mix.

There is a Woodstock element to disc three. The songs were recorded in the ’70s, so it makes sense that they would have the authentic groove. “Changes” has a moment near the end where Hendrix preaches to the audience, and they go crazy with whistles and chants. He had a significant impact on people of all ages and continues to change young lives today. For the '70s, the live tracks sound like they were recorded in a professional studio. Yes, the Equalization is slightly off, but it's difficult to get it right with thousands of screaming fans in the recording.

Disc four has more of that cross over that we saw from the previous discs. I for one am a Hendrix fan and will never get tired of listening to his songs. It's a shame that he passed away at such a young age. It would have been incredible to see how far he could have come if he had lived another 50+ years. Hendrix took songs to new heights. "Machine Gun" has an interesting mix of colors in it. There isn't a great way to describe it. You would have to listen to it to understand it.“Steal Away” is more mellow in sound. It’s an easy-listening song that would be perfect for a busker to perform. Its simplicity is perfect for people who want to learn how to play a Hendrix song.

Disc five flows better as a set. "We Gotta Live Together" involves the crowd. They are instructed to clap their hands with the beat of the song. I love that Hendrix's team left in clips of his interactions with the audience. That is how you know that he was a true performer. A lot of acts nowadays don’t have the flair and style that Hendrix had. Hendrix puts a cool spin on his cover of "Wild Thing" by The Troggs. It feels less boy band and a more mature rock. "Purple Haze" is the last song you'll hear on the set. It is thought that Hendrix is referencing psychedelics in his lyrics, which wouldn't be a shock. It ends the CD with lyrics that give you something to think about. I guess that's why they call it "The Jimi Hendrix Experience."

Hendrix is beloved all around the world because you don’t need to speak English to understand the language of music. The dynamic range that comes from his guitar is insane. Though Hendrix wasn’t much of a singer, it is impressive that he managed to sing while he shredded. Most of Hendrix’s fans have their favorite songs and it was a smart move for his record label to release the best takes of his live songs. The 5-disc set (43 songs) retails for $60, and the vinyl set retails for $120. Each album has collector’s photos of Hendrix performing. It has been about 50 years since Hendrix passed away. His music is celebrated globally, and clearly, there is still a market for his songs. Jimi Hendrix is a household name. You can buy tour tickets to see other guitarists play his songs, and many people do. Which is a testimony that Hendrix is still changing lives from the grave.