Book Review: Tom Petty and Me by Jon Scott 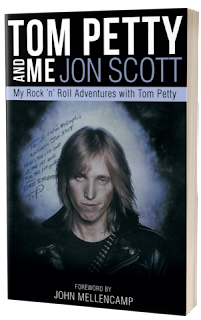 Some of the best rock music you will ever hear was recorded by the late great Tom Petty. To reach that elusive plateau where you become a legitimate superstar, a household name, and all of your songs are instantly recognizable around the world, is for the few not the many.

There has to be at least one person to believe in you and dedicate their time and energy to get other people to follow. That is where it starts and hopefully grows exponentially. Things today are a world away from the days of DJs and A&R men to play music and push out to a listening public.

Jon Scott was one of those people that entered the life of Tom Petty that helped to get his music heard. The book by Jon titled Tom Petty and Me tells the trials and tribulations of making those important things happen for an artist back in the 70s. Against all the naysayers, negativity and the dreaded music consultants, Scott broke Petty, big time. Their first meeting was a bit rough due to ABC Records blowing off Tom’s first album, but things would change with time. Once Scott got Petty to believe in him it was like a fairy tale come to life.

I have enjoyed Petty’s music, particularly the first two albums. I did not know the back story of Petty and thanks to Jon Scott and the interview I had with him (included here) and reading his book, I know what happened and what it took to make things happen.

The book is an easy read, to the point, and very entertaining. It is not too long either so when you look at it, you’re not faced with a daunting task like reading something that may take you weeks or even months. This is the way a book about rock music should be written, short and sweet and to the point. And every chapter is like that, it does not drag and never once did I wonder when a chapter was finally going to end.

I have read my share of books about music over the years and Tom Petty and Me was one of the best and most memorable. Thanks to the interview that Jon so graciously provided, I was able to get to know him better, and while I was reading, find some of the missing pieces and details, he did not cover. The experience for this reader is now complete.

Tom Petty and Me is a must-have for any Petty fan or music lover that is interested in how things worked in the industry before the internet and Spotify. This is when people mattered the most and their influence was paramount in breaking an artist. The author’s account is heartfelt and honest, and there is no other way to slice it. I loved the book and how it shed the truth on all the people that played their part in the making of a superstar we will never forget.

Tom Petty was the real deal, a down to earth matter of fact Southern boy that found his way to stardom through a brother he did not know but came to know, Jon Scott.