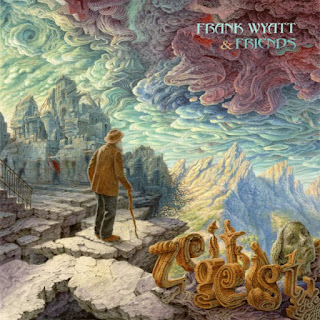 Zeitgeist is a collaborative music endeavor led by Happy The Man legend Frank Wyatt featuring members of the progressive rock bands Happy The Man, Oblivion Sun, and the Pedal Giant Animals Project. Zeitgeist started out as an idea for a Happy The Man reunion CD, but evolved to include other musicians Frank has performed with during his career. The music has been produced in the studios of the respective artists and at Frank's Crafty Hands Studio. This unique gathering of such great musicians has delivered a beautiful and exciting musical experience.

“The album's concept turned into a sort of  'goodbye, or one last swing at it'  as I had been diagnosed with the big 'C' and told I was short on time. I had no idea  the project would take so long! I'm five years out of warranty now and still kicking. Perhaps the project has been what's kept me going; I've been too stubborn to give up on completing it. I plan more work already... music is great medicine. Recording the music was a great joy but very difficult to coordinate as everyone performing lives in another state. I was constantly having to put things on hold as one treatment or another made me too sick to function, but the result, I believe, has validated the struggle. The guys all delivered amazing performances. The project musicians are all friends I have played with over the span of my career. They all generously donated their time and talent for the project, and I am so thankful for them.” ~ Frank Wyatt

In closing Frank has this message to impart, “Don't surrender to the daily fog and fear.  We are all moving forward on our journey and I am going to keep writing and recording music as long as I am able. It is my voice.”