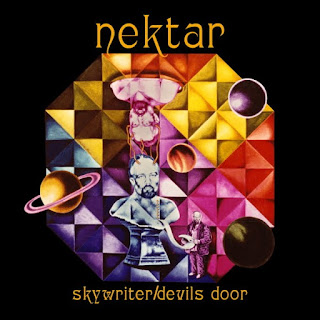 Prog legends Nektar have released their first single “SkyWriter” B/W “Devil's Door” in October from their eagerly anticipated forthcoming new album “The Other Side”! This is the first new studio album by Nektar made in the United States since 1977!

The original members of Nektar; Derek “Mo” Moore, Ron Howden, and Mick Brockett are back. They've added Ryche Chlanda from Fireballet and the 78' band, Randy Dembo from the 2005 band, and newcomer and world-class keyboard player, Kendall Scott.

The music for Nektar's new album “The Other Side” comes from the 1978 era when they were writing in Mo's basement in Chatham, New Jersey. This music was put on pause for the last 40 YEARS and it's now time to release it with new input and fresh ideas. The music is growing exponentially as Nektar continue rehearsing and writing and letting it take the band to new heights.

Of the new single, Mo explains, “'Sky Pilot' I wrote in 1978 but did not like it so much, it was OK but not finished. Ryche switched it around and wrote the music for the verse and it became 'SkyWriter' which I love. Words are by Ryche, Mick and myself. It's a story of a guy whose significant other...wife, girlfriend, mother, dies and he is up in the sky writing letters which he hopes she will see. All part of “The Other Side” concept. By the way it does not say he was flying IN anything, I will leave that to your imagination.”

The b-side of the single “'Devils Door' was an old 1974 song we played in a couple of concerts back in the day but we never finished it, I think the chorus was a little too high and we had never taken it into the studio to finish it. Ryche, Mick and I wrote lyrics for it and got it ready to record. While we were getting ready I realized that Roye Albrighton's introduction guitar sounded great, I suggested starting off the song with it which was enthusiastically received by all. It became a great piece of music and the beginning vocal even sounds like Roye. The story is of flying near the and flying away from the Devils Door which is beyond the Other Side...”

The 12-inch Vinyl and CD single will first be available at ProgStock, which the band will be performing - October 11th – 13th. Nektar's new album will be released on Esoteric Records in the UK in January 2020. 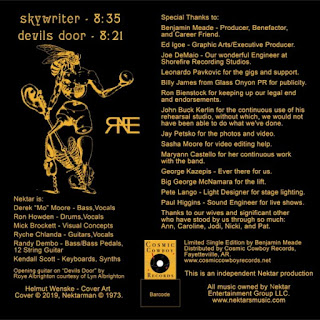 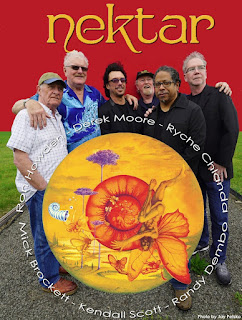 Thank you from all of us at Nektar.....
Derek, Ron, Mick, Ryche, Randy, and Kendall