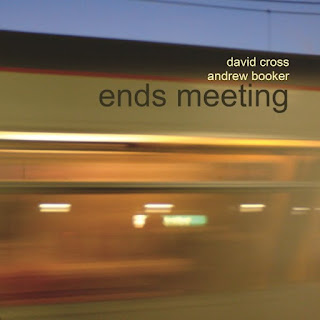 This PREVIOUSLY UNRELEASED STUDIO ALBUM was recorded in 2006 but had not seen a release until now.

David Cross said of the release “I met Andrew some years ago when the David Cross Band were touring with Pete Banks's Harmony and Diversity. Andrew was the drummer with that band and we got together after the tour to record some tracks. This eventually turned into the album we're releasing. Andrew brought a great deal of creativity and high level production skills to the project and is one of those people who make it easy to play - a wonderful talent!”

Andrew Booker said of the release, “David and I recorded only once together. I had come prepared with several sounds and tonal themes set up on the electronic drums, hoping to catch a little of the magic I had seen watching him with his band a few months earlier. I got that in spades. As I listened to David’s endlessly inventive phrasing, track after track, I knew we were capturing something special. Soaring and searing, or serenely soothing, even 12 years later I still find bits of it breathtaking, music for electric violin and electronic percussion in an arid North African heat-haze.”

The seven new tracks on this album showcase the talents of Cross & Booker and will appeal to the fan-bases of both artists and the bands they have been in. It's an innovative meeting of minds.