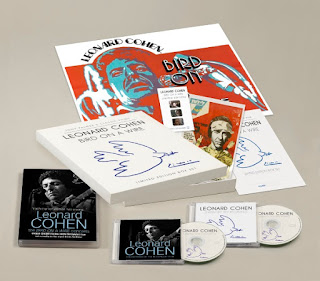 London - Legendary Film Director Tony Palmer was in his archive looking for something completely different when he discovered a box of archive film and sound recordings from Leonard Cohen’s famous 1972 tour, which formed the basis of the highly critically acclaimed, multi-prize winning and best-selling DVD “Bird On A Wire.”

Concert material from the concerts in Stockholm, Paris and the Albert Hall, with Cohen at the height of his powers performing “Marianne,” “Susanne,” “Joan of Arc,” “The Story of Isaac” and many other songs, is now being restored and edited together by Tony Palmer, who shot the original material.

This will be interspersed with more backstage film of the band on tour, and even some fresh interviews with Cohen himself all of which has remained unseen for over 45 years

These releases will act as a companion recordings and film and will all add considerably to footage of the early part of Cohen's career. For which there is an increasing need since, apart from the film “Bird On A Wire,” there is comparatively little widely available.