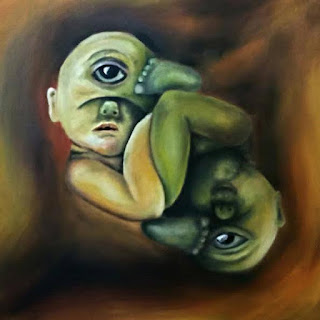 Bulgogi, Korean for “fire meat,” is a type of marinated beef, a dish of some repute. The quartet seems to channel its power from the concept of this flaming meat. Says frontman Tim Tsurutani, “Life is foggy and misty as hell. Sometimes things are beautiful. Sometimes things are the opposite of that. Mostly, things are boring or just confusing. Fortunately, some people have incredible visions of reality that transcend the mundane stuff. 'Juan Dissed The Cyclops Baby' pays homage to that-not knowing what the hell is going on and being enraged by what we see happening but at the same time maybe having a fool's faith that there's something bigger out there? Something cosmic we hope? Cthulhu?”

It all started with one dude in a damp basement in West Asheville, NC. Bedroom recordings of endless guitar tracks spilled over dance beats made up the bones, muscle and fat of Bulgogi's first release, “Give Up Your Guts”, a series of eerie but pretty dance punk tunes. After 2014's sophomore release, “Bibimbap”, Bulgogi became a four piece and set out to record a rock opera. Many sweaty and feverish shows later, chronic ADHD had reduced the rock opera to perhaps a 4 song EP instead.

With the help of a young local producer, the lads finally managed to piece together “Juan Dissed The Cyclops Baby”, a gleeful and manic amalgam of prog rock, psychedelic, post punk and a certain je ne sais quois.

Says bassist Galen, “Writing the songs together was very exciting because we had only just become a four piece and were still learning who we all were. At first we wanted to call the album 'Jaundiced Cyclops Baby' and people were like, 'why? That name is terrible.' To us, it kind of represented like a gestational period. We were all experiencing weird post adulthood growing pains. Pressure to be successful and not really getting there was haunting us. We wanted a lot of people to hear our music, but it was hard because we were poor and had to work day jobs. It took us awhile to be able to prioritize what we were doing and somehow that title seemed appropriate. Then we realized it actually sucked and changed it to 'Juan Dissed The Cyclops Baby' which is borderline nonsense. Ah well.”

Bulgogi is:
GALEN plays bass. He might be a college graduate.
RYAN plays guitar like it is a modular synthesizer and is generally a confused person.
HUGH plays drums. His real name is probably Hubert. His hair is red.
TIM sings and plays guitar. He is the sexiest member. It is not close.

Here's what the press has said about Bulgogi:

“A twitchy, dancey, textural adventure through nightscapes, static dreams and startlingly sweet melodies.Tsurutani's lyrics may be tongue-in-cheek at points, but his acrobatic vocal abilities are no joke.” - Alli Marshall, Mountain Xpress

“The Asheville psychedelic dance punks brought a ton of weirdness to the table on their January release, BIBIMBAP. We’re glad they did, because Weird Kids Don't Love might be our favorite song from the tarheel state this year.” - Future Chord

In support of the new album, the band plans to produce a music video featuring bizarre monsters terrorizing a man driving a modest sedan. “We seem to have a guilty pleasure for launching assaults on the everyday humdrum of modern life,” says singer Tsurutani. “Also we have a friend who is amazing at costume design, so why not?”

In closing Bulgogi has this to impart, “Don’t be afraid. Don’t let fear and selfishness breed oppression. No one is free until everyone is free.”