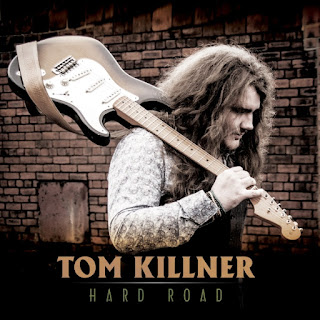 Los Angeles - One of the hottest young blues guitarists to emerge from the UK, Tom Killner, will be releasing his debut album “Hard Road” on September 4, 2015 on Cleopatra Blues in the US. Born in Rotherham UK, Killner was deemed a child prodigy of six-string blues by age 9, formed his first band a year later, and now at 19 his debut release contains a smoking hot collection of covers and originals! The album is currently at number 6 in the Amazon UK blues Hot releases charts!

Says Tom, , “It's been a long wait for my fans for me to release an album. Over the last two years they have asked when I would be bringing my album out, so when the offer came along from Cleopatra Records to make this album I felt greatly honored and pleased to be one of their artists, alongside the massive names on their label.

“This album is my first and it’s really about the struggle, knockbacks and pain, and how you get back up and fight some more for what it takes to finally get there. That’s why I decided to go with 'Hard Road' as the title track. Along with the other tracks there's love songs, soul and good old rock in there about my journey so far. There is something for everyone.

“I really enjoyed working on this album. There's material here that I would not usually play. It really pushed me out of my comfort zone to recreate the covers and make them mine as well as bringing my songs to life and getting them down after playing them for a few years on the road.”

When you get right down to it... to the heart of what the blues are all about... Eric Clapton hit the nail on the head. “It was one man and his guitar versus the world,” he said. “It was one guy who was completely alone and had no options, no alternatives other than just to sing and play to ease his pains.” It doesn't matter how the music has changed and charged its way around the world in the years since the first bluesmen arose a century back in the American south. It doesn’t matter how volume and fusion and international superstardom have shaped and shifted things around. The blues that Clapton plays today mean the same thing that Howlin' Wolf was playing in the fifties, and Son House was playing in the thirties, and they're the same as Tom Killner is playing today.

The sound may change, and the delivery, too. But the blues will always be the blues. Tom Killner understood that before he even discovered that the music had a name.

Says Tom, “I was originally drawn to the blues because nothing else really grabbed me. My friends all listened to metal and pop, but I've never been one for following trends in music. The blues I love because of the raw power, and because of what it could make me feel. No other music did that for me.”

The Tom Killner Band was formed in February 2012, a tight trio in the classic blues format of guitar (Tom), bass (Oliver Tallent) and drums (Jake Ashton). It was a line-up that worked for Cream, that worked for Taste, and worked for the Jimi Hendrix Experience. Now it's working for the Tom Killner Band, as they set up the no-holds-barred barrage that hit that year's Great British Blues Festival like a levee giving way, and has swamped every other stage the band has played on... from the vastness of blues festivals in Wakefield and Hebden Bridge (two years running, voted the UK's best blues event), to theaters and clubs around the country.

“I try to add as much energy to the live show as I can each night,” explains Tom. “No two shows are the same, and no song is played the same. Every night, I try and mix as many influences in as possible - Blues, Soul, Southern Rock, Funk... and it seems to be keeping everyone happy!”

Their fame continued to spread. The Tom Killner Band opened for Danny Bryant, and were rewarded with the headliner's own admiration - “an excellent, incredible guitarist.”

Endorsements from Fret-King and Vintage Guitar sent the band's stock soaring even higher; while their first EP, “Complicated”, became a BBC radio favorite. And finally, inevitably, the Tom Killner Band's acclaim reached across the ocean, to the Los Angeles headquarters of Cleopatra Records.
Now, much to the excitement of blues music aficionados worldwide, the Tom Killner Band are releasing their debut album, knowing that it is already one of the most eagerly anticipated blues releases of the year.

“Jim Morrison once said 'show me the way to the next whiskey bar', I'd like to think what he might of heard in there would of resembled 'Hard Road' by Tom Killner. The album is a superb retro sounding blues rock album with a little bit of southern influence, interspersed with some passionate playing from Tom and packed with a whole lot of soul.” - Adam Kennedy, National Rock Review

“This CD is a must for all avid Blues and Blues./Rock fans-trust me on this.” - Phill Penny Blues Show Radio Trent