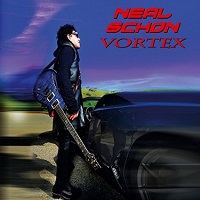 Neal Schon’s music career speaks for itself.  He was a member of Santana, fronted by the famous Carlos Santana, while still in his teens and went on to be a part of hard rock groups Bad English and Hardline, before finding mega success and fame with Journey during the 1980s.  Despite all of that, he still has time to work on solo projects and his latest solo release is a testament to his skill as a musician.

Starting off relatively strong, “Miles Beyond” is an all-around rocking song.  It has great atmospheric opening with the drums providing a sweltering tribal sound.  There is a sweet change in the sound about halfway through the song when things get noticeably heavier.  I like the song, and the guitar sounds amazing, but it could have been a tad shorter.  Following it up is “Awakening,” which is a very intriguing song with its mellow opening.  It is dazzling and wondrous rock song with soft, mystical quality running through it.

“Cuban Fly Zone” is the type of song where the electric energy is practically contagious, and the guitar work is flawless, which is the real staple of this release.  The sizzling “El Matador” sets itself apart with its Spanish flair, making it one of the more memorable and distinctive songs on the double album.  The piano driven “Eternal Love” is a complete change of pace, focusing on being subtle and emotional for a hauntingly beautiful result.

The next few songs take a more laidback approach to their sound.  “In a Cloud” is a light, upbeat track that is dreamlike in quality and the music of “Irish Cream” is as smooth as its name says. “Lady M (Our Love Remains)” is lovely, serene tune dedicated to his wife.  “Airliner NS910” is a great rocking tune that is lively, with a funky jam quality to it.  The guitar completely tears things up.

“Tortured Souls” begin the second album and is a low-key tune that I find to be very relaxing. This could easily be the soundtrack to a picturesque dream. My slight criticism of it is that, with its run-time clocking in at over ten minutes, I think the song does go on for a bit too long.  “Schon & Hammer Now” is a stellar rock song.  The guitar sizzles and delights.  The changes in the music happen at the right time to keep the song engaging and prevents the song from becoming dull.

“NS Vortex” starts with a spacey opening, before a more manic rock sound takes over.  For some reason, I am reminded of a light show when listening to this.  The drums really heats things up near the end and steal the show. “Unspoken Faith” is short and serene. “Twilight – Spellbound” is another song with all the right touches.  The tonal shifts keeps the song exciting and unpredictable, and the guitar really cuts loose during the second part of the song.

“Mom” is a short and pleasant acoustic song. “Talk to Me” is a very eclectic song with a variety of sounds but it manages to work. There are some nice twists and turns in the music and things really step up in the last few minutes for an intense and breathtaking piece of work.  The somber “White Light” is a fitting and beautiful ending.

Neal Schon’s Vortex is nothing short of excellent and an instrumental tour de force.  The album is showing a master working at the top of his game.  Hardly a wrong move taken, save for a song or two that could have been shortened, Vortex is sure to please his fans.  There should be a place for this album in every rock fans collection.