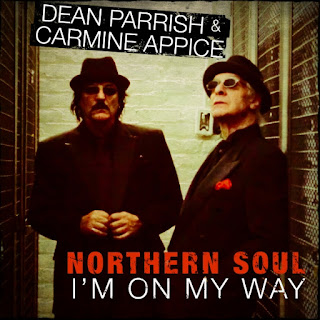 Los Angeles - Legendary drummer Carmine Appice and New York 60's hitmaker, vocalist Dean Parrish have reunited after 50 years to record a new 7 song EP of 60's soul music, commonly known as Northern Soul music. Aptly titled “Northern Soul - I'm On My Way”, the EP will be released on iTunes in August 2015. The duo first met when in the early 60's they played opposite of Jimi Hendrix, known at the time as Jimmy James. The band, called The BEEETS, played Stax, Motown and Altantic 60's soul. Carmine eventually went on to have major success with the likes of the Vanilla Fudge, Cactus, Beck, Bogert & Appice, Rod Stewart and countless other artists, while Dean pursued a solo career and had a number of hits in the UK and US. He did several Murry The K tours and performed on the Dick Clark show and other well know TV programs at the time such as Zachary Channel 11 NYC, and the Clay Cole show. Dean has performed on the same bill as Mitch Ryder, The Capitals and Lou Christie. He has recorded and toured with the likes of Jorge Santana, Paul Weller, Lord Large and the legendary Bob Marley. Dean even recorded 2 Jams with Jimi Hendrix & Eddie Kramer at Juggy  Murray's  studio NYC 1969 with the band the Rosicrucians aka Steeplechase. In the 2000's Dean was featured in a wedding scene as the Mcee on the hit show the Sopranos.

Says Carmine, “While Dean was doing those Murry the K shows and having hit singles. I was having my career with Vanilla Fudge having hit albums at around the same time....There was always a connection with me and Dean. I hooked him up with my Vanilla Fudge manager Phil Basile, and in turn Phil got two album deals for Dean with band members who were also friends of mine and dean's from 60s....it was after that that Dean cut 'I'm On My Way', which became a big hit ...but over the years me and Dean stayed in contact.”

Then in the early 2000s, Carmine and Dean reconnected again through a mutual friend Randy Pratt, harpist for Cactus and bassist for The Lizards (who have a new CD released) and Rickity. The duo began writing and recording at Randy's studio in New York, which was the start of the “Northern Soul” release. Carmine and Dean had songs they wrote and recorded in the 60's and rehashed them into what's being released today....so this EP was destined to be finished. It features re-recorded versions of the big hit “I'm On My Way”, a karaoke version, a classic mix of the song as it was in 1970's, and a modern version along with new RnB classics such as “Love's Whatcha Cooking Babe”, “Fever” and “Lonely”, all really cool old school RnB, with an old school vibe but recorded with today's sonic sound.

Says Dean, “Singing and playing guitar on this EP with Carmine was a labor of love, a feeling of togetherness that just comes with Northern Soul Music. This movement is still is very much alive today more than ever with a passion a kind of music that takes hold of you.”

Says Carmine, “Some of my favorite music was the 60's RnB and the songs on this EP with Dean singing are exactly that, 60's RNB or today known as Northern Soul. Back in the early 1960's before Vanilla Fudge, I played with Dean in a 7 piece RnB group. Dean was always great at singing this music and I and glad to being playing that music with Dean again. I enjoyed putting this music together with him!”