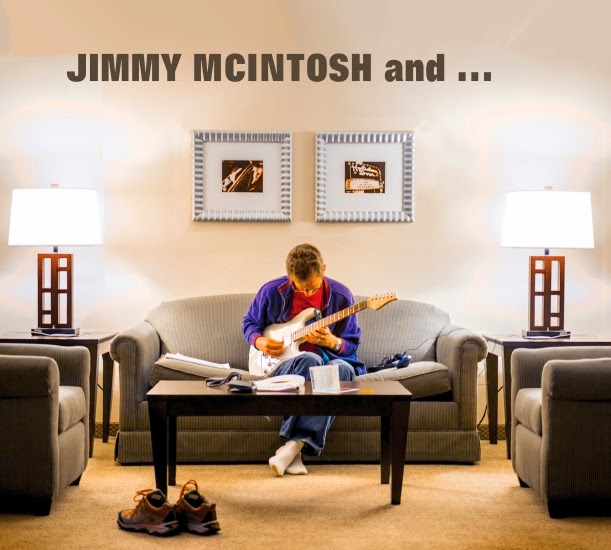 Las Vegas, NV - As a follow up to 2006's  'Orleans to London', guitarist Jimmy McIntosh once again finds himself in illustrious company on his new album 'Jimmy McIntosh and...' This collection of funk, rock, jazz and blues originals showcases McIntosh's considerable six-string prowess and features the Michigan native exchanging incendiary licks with his personal guitar heroes John Scofield , Mike Stern and the Rolling Stones' Ronnie Wood. The solid backbeats are supported by Toss Panos (drummer of choice for guitarists Robben Ford and Mike Landau), bassists Dan Lutz, John Humphrey and Keith Hubacher and New Orleans keyboardist Ivan Neville (of The Neville Brothers, Keith Richards' X-Pensive Winos and Dumpstaphunk). This stellar outing was definitely a labor of love for McIntosh.

For 'Jimmy McIntosh and...', McIntosh recruited Scofield and Stern from his home base, Las Vegas. Says Jimmy, “I got to know John and Mike about 12 years ago when there was a Blue Note jazz club in Las Vegas and became good friends with both of them. The Vegas Blue Note was short-lived, but I was there almost every night for the duration of their gigs. I've jammed with Mike several times and asked him, 'If I make another record, will you play on it?' And Mike said 'sure'! Toss Panos, John Humphrey and I went into Toss's North Hollywood studio with Mike when he was in Los Angeles playing with his band at Catalina's. Mike's playing on this album is just brilliant. Then John happened to come through town with Phil Lesh & Friends just a few months ago. I had mentioned to him that I was doing this album and he said, 'Hey, if you still have room on your CD, I'd love to play on it.' So that came to fruition as well. It was a dream come true for me to create this CD with three major heroes of mine and who have also become very good friends over the years.”

McIntosh's friendship with Ronnie Wood goes back to his solo debut, 'Orleans to London'. Jimmy recalls, “I first met Ronnie backstage at a Stones show in Las Vegas. Ronnie and Keith Richards were hanging out with Bobby Womack in the 'Tuning Room' were they Jam to warm up before the show. Art Neville did me a huge favor and called Jane Rose for me to meet Keith and Ronnie. It was a wedding gift as I got married a week before (This was April 1999). Anyway a few years later I recorded my first CD 'Orleans To London' and Art Neville, Ivan Neville, Cyril Neville and Mean Willie Green (Neville Bros drummer) played on it. As I was near the end of the project in October 2004 I got in touch with Ronnie Wood through his stepson (Jamie Wood) who was his manager at the time and told him about my project. Three weeks later my wife and I flew to London and went to Ronnie's house in Richmond were he played on 5 tracks (first takes). Ronnie said, 'I told Jeff Beck about your project and he might come by to play' - I was in shock! About 2 hours later Jeff showed up and ended up playing on 3 tracks. Ronnie said as Jeff was recording, 'You can't believe how lucky you are, he won't play on anything!' I'm not sure what Ronnie told him about the Neville's being on the record but it was amazing having both those guys on the record. Jeff is credited as 'Hot Rod' on 'Orleans To London' because his manager wouldn't let me use his name.

“Ronnie and I hit it off fantastically and stayed in touch so when I started a second record I was hoping he would play on it. I covered a tune from Ronnie's latest album called 'I Gotta See'. Ronnie plays a great solo and outro slide solo on the song. Ronnie and I also played two improvised Jams that open and close the album like bookends. The Jams are just the two of us live in the studio without the band. The Rolling Stones have been my favorite band since I was a kid so getting to work and play with Ronnie is literally a dream come true. Ronnie is truly a great artist. It's amazing that all of the iconic records Ronnie has played on were mostly first takes on his part. He is really underrated as a musician. I wrote six originals for 'Jimmy McIntosh and...' Ronnie wrote one of the Jams 'Fast Blues' and we share credit on the opener 'Slow Blues'. I covered a few tunes... 'I Gotta See' by Ronnie Wood, 'Demon' by Keith Richards, '32 20 Blues' by Robert Johnson and 'Sophisticated Lady' by Duke Ellington. Duke Ellington was a friend of my family when I was a little kid and greatly encouraged my interest in music. When I played French Horn in the Junior High School band I told my mom I was going to change something in the music. She asked Mr Ellington if I should do that and he said, 'I think you have a musician there!'

“The record was recorded at Toss Panos studio in North Hollywood. Toss is a great drummer I first heard with Michael Landau. John Humphrey (Scott Henderson Trio) is on bass on most of the record. Keith Hubacher is on bass on two tracks and Ivan Neville plays organ and Piano. Albert Wing who played with Frank Zappa among others plays Tenor Sax on 'I Gotta See' and 'Demon', a Keith Richards cover. Ronnie and Ivan are on both of my records which I'm very proud of. It connects the two projects.”

Born on October 14, 1958 in Sao Paolo, Brazil, Jimmy McIntosh grew up in the small town of Temperance, Michigan. After graduating from high school in 1976, Jimmy attended the Berklee College of Music for two years. Over the years McIntosh has played with R&B singer Doris Troy, Billy Preston, Little Anthony & The Imperials, and backed up Buddy Hackett and Ben Vereen, Since 1990, McIntosh has played regularly in the popular Lon Bronson All-Stars Band, a powerhouse horn band. The Lon Bronson band had a longstanding weekly residency at the Riviera, where they entertained crowds 'til the wee hours and featured such special guests sitting in as former Doobie Brothers guitarist and producer Jeff “Skunk” Baxter, guitarist Joe Walsh, Members of TOP, comedian (and sometime trumpeter) Drew Carey, bassist-magician-comedian Penn Jillette and former “Tonight Show” guitarist, bandleader and Jay Leno sidekick Kevin Eubanks. In 1999, following his longstanding engagement with the “Legends” show, McIntosh moved to the Rio Hotel to perform in a show with pop stars Sheena Easton and David Cassidy, then worked for the following two years in Cassidy's touring band. He has subsequently played with pianist-composer David Foster, Donna Summer, Kenny Logins, Gloria Gaynor and played in musical theater productions of “Mamma Mia” and “Jersey Boys.”

And now, after several years, Jimmy's long awaited sophomore album is now available! In closing Jimmy has this to impart, “My new album 'Jimmy McIntosh and...' is a real labor of love and hope people enjoy it!”