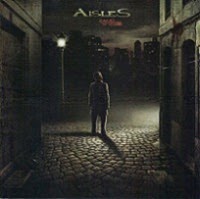 Who is Aisles? Aisles is one of the greatest, most creative and talented bands that you have probably never heard of.  Hailing from Chile, the band consists of Sebastián Vergara (Vocals), Rodrigo Sepúlveda (Guitars), Germán Vergara (Guitars), Juan Pablo Gaete (Keyboards), Daniel Baird-Kerr (Bass), and Felipe Candia (Drums).  A progressive rock band with art rock, world, fusion, and other influences, Aisles have created themselves a unique sound that is not soon forgotten.  4:45 AMis their third album and it is nothing short of a masterwork of art.  It is the reason people fall in love with music in the first place.
“4:45 AM” is a stunning opener that will have you falling in love with this band.  From the rhythmic and soulful music to the emotional and distinct vocals that jump out at you, it is hard not to stand up and take notice of the talent on display.  The music is fresh, popping, and invigorating, or everything that progressive world music should be. “Gallarda Yarura” might as well be the soundtrack to the fantastical dreams of an imaginative child. The music is light and hopeful, making for a very pleasant sounding instrumental.
Do not be fooled by the seemingly upbeat melody, because “Shallow and Daft” can be seen as a tale of what happens when an artist gives up his artistic integrity, as well as a biting commentary on the state of modern popular music.  It is dark, it is lyrical, and it is spot on.  “Back My Strength” is a musical tour de force.  The music rises and falls with the naturalness of an ocean wave, and is grand and majestic as a snow-capped mountain.
A low-key approach is used with great effect on “The Sacrifice.”  The acoustic guitar lingers in the background as the passion and pain in the vocals steal the show.  It is a somber song with the dark beauty of a romantic painting.  “The Ship” is a short interlude that leads into the spacey and hypnotic instrumental “Intermission.”  “Sorrow” is simply breathtaking.  The vocal performances are top notch, as the male and female vocals complement each other so well, in addition to be sounding so beautiful and powerful on their own.  The Latin/Jazz influences present in the song make it stand out that much more.
With its dark and ominous sounding opening, “Hero” has me thinking a bit of Pink Floyd’s Dark Side of the Moon.  It becomes a bit brighter as the tempo picks up and the keyboards kick in, while the guitar and drums razzle and dazzle. Another change in tempo slows it back down and the atmosphere becomes more mystical.  It is definitely a stand-out song and the one that comes to mind when I think of this album.  The finale, “Melancholia”, is pure genius.  It is a work of art that will take you on an emotional journey that is very reflective.  As the song winds down, there is a calm of looking out into an ocean after a storm has passed and it is magnificent.
If you are in any way a fan of progressive rock, than I cannot recommend Aisles’ 4:45 AM to you enough.  If there is a band to take a risk on, then Aisles is that band to do so, because this album is everything that this type of music should strive to be.  It is fresh, challenging, inspired, touching, and so much more.  A complete experience from start to finish, 4:45 AM is an astounding piece of work for the ages.
5/5 Stars
Key Tracks: 4:45 AM, Sorrow, Hero, Melancholia