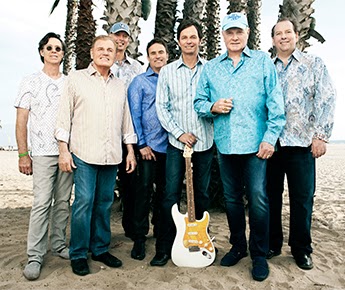 The Beach Boys are Mike Love and Bruce Johnson, who lead the band, and Jeffrey Foskett, Randell Kirsch, Tim Bonhomme, John Cowsill, and Scott Totten round out the rest of the lineup nicely.
They most certainly lived up to their reputation in Tanglewood last night. It was a perfect evening for a concert although some of the band members are used to the warm California sun they were able to get things heated up without a problem with their set list.
I have been listening to their music since the late 60s and never had the pleasure of seeing them live. The Wilson brothers are not part of the mix any longer. Brian tends to his solo career, Carl, and Dennis both passed away several years ago. Although that is unfortunate it has not stopped the legacy of this great American band from carrying on the tradition of old and new music and getting people dancing in the aisles, or in this case the lawn too. 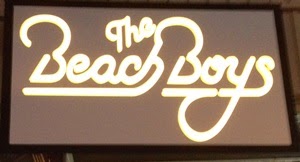 The set list they played was beyond compare and to kick it all off they buzzed through 8 songs before stopping! It was non-stop beaches, sun and fun. Mike Love is amazing and sounds as good as ever. I can’t think of many active 73 year old vocalist that sound as good as he does right now.
I was impressed with the entire band to be perfectly honest. They all can sing and play extremely well. Most impressive was John Cowsill, who hammered away on the drum kit like he had a lifetime supply of caffeine in his bloodstream. I also need to account for Jeffrey Foskett who played guitar and sang like an angel (think Brian Wilson parts) and of course their musical director and lead guitar player Scott Totten who can also sing those high notes synonymous with the Beach Boys sound. Their harmonizing was superb all night long…a gift from the stars coming together under the stars. And you cannot underestimate the importance of long time member Bruce Johnston. Not one individual is more important than another, they all blend together as a team and function like a well-oiled musical team.
I saw the entire spectrum of age groups from small children to elderly folks in attendance. It was not too long before they started to crowd the stage and start dancing everywhere; it was definitely “Fun, Fun, Fun.” Some of my favorites of the night were “God Only Knows,” which they let Carl sing lead on as everyone watched him on the big screen, it quite moving. It was a very nice tribute to one of the members that are no longer here to share the music. Also one of my all-time favorites “Don't Worry Baby,” made me feel fuzzy and warm all over like it always does. 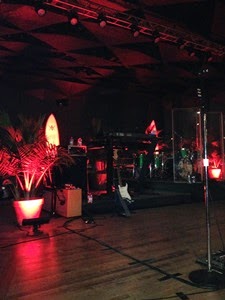 Towards the end of the night when people were up front dancing they invited some young girls on stage to dance and one of them strapped on Scott’s guitar then he stepped in behind her and played. The look on her face was priceless.
The Beach Boys stand as one of those iconic bands like The Beatles and The Rolling Stones and they showed us all why last night with a great evening of music and showmanship. I would not think twice about catching them live again, it was just way too much fun and it was one of the best natural highs I have ever experienced at a concert.
Keith “MuzikMan” Hannaleck-Write A Music Review, Prog Rock Music Talk and New Age Music Reviews Founder
August 19, 2014
Set List: