Classic Rock Heroes Enuff Z’nuff Mark Their 30th Anniversary With The Release Of Their First Ever Covers Album! 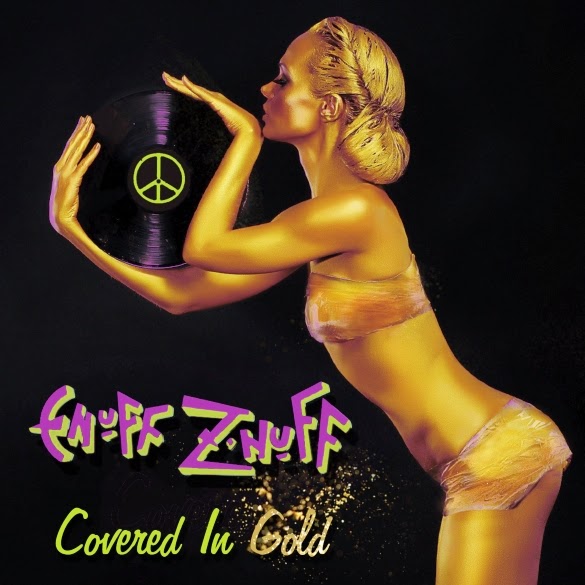 Los Angeles, CA - Celebrating an amazing 30 years as one of the hardest working bands in show business, Enuff Z’nuff proudly present this exciting new project, a heartfelt salute to the music and artists who have inspired them over the course of their 3 decade career! Covered In Gold, a collection of 12 brand new studio recordings, features an eclectic assortment of cover tunes including Bowie’s “The Jean Genie,” Nirvana’s “All Apologies,” Prince’s “When Doves Cry,” Smokey Robinson’s “Tears Of A Clown” and lots more, all of which showcase this group’s incredibly diverse yet supremely melodic sensibility. The album also includes 2 rare bonus tracks, a live unplugged version of the group’s 1989 hit single “New Thing” plus another cover, of The Beatles’ “You’ve Got To Hide Your Love Away,” performed live on the Howard Stern show.

Founder, bassist, singer and namesake of the group, Chip Z’nuff, has led the band through its highest highs as well as its most turbulent times. The band scored two major successes in 1989 with hit singles off of their self-titled debut album, the aforementioned “New Thing” as well as the powerful ballad “Fly High Michelle,” both spent 46 weeks in the Top Ten on MTV and earned them a gold record. on MTV. In 1991, the band released their second album Strength, which had Rolling Stone magazine calling them “The Hot Band Of The Year” as well as earning them numerous appearances on the Late Show with David Letterman. The mid-late ‘90s brought difficult changes, but Chip kept the Enuff Z’nuff torch burning with several tours both Stateside and overseas as well a steady stream of well-received studio albums.

Now an esteemed statesman of the music world, Chip continues to grow the EZ fanbase performing shows worldwide. He has also found a new passion in broadcasting, first as a frequent guest on Howard Stern’s radio program and more recently as co-host of the TV show “Mancow TV.” Covered In Gold, like Enuff Z’nuff, is further testament to the timeless appeal of great rock melodies, and not to be missed by fans of Steven Tyler, Robert Plant, and Paul Stanley. As David Letterman says of the group, “When it comes to Rock N’ Roll, you don’t need anybody else.”

“One of the most exciting and gifted bands on the scene today!” - Rolling Stone magazine

“Enuff Z’nuff is one of the most underrated bands in the world!” - Steven Van Zandt