The Johnny Winter Band At The Mahaiwe In Great Barrington, Mass. January 23, 2009 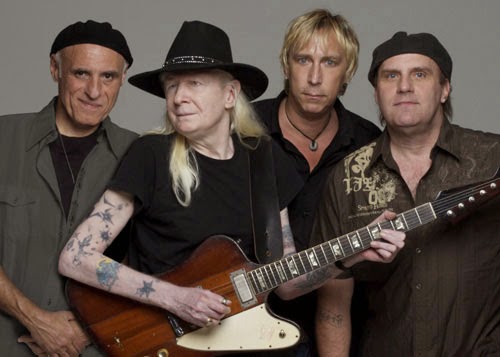 I am republishing my 2009 concert review in memory and in honor of the late great Johnny Winter.
It had been nearly four years since I saw Johnny Winter perform live. That was the first time for me back on that hot summer night in Arlington, Mass. This night was like stepping into an alternate universe. The weather was the exact opposite and so was the performer. I did enjoy seeing Johnny for the first time but I had nothing to compare it to, now I do.
Johnny was just coming off hip surgery and a long time drug addiction and needed help to get on the stage. I am glad to report that he is doing so much better these days. He has gained over 30 pounds, makes his way out the stage on his own, and is playing and singing like a man 20 years his junior. Before and after the show I had the privilege of speaking with Johnny thanks to his manager and guitar player Paul Nelson. Paul does everything from managing the band and tours, playing and recording with Johnny, anything you can think of Paul is right there for Johnny making sure everything is handled properly. Prior to the show Johnny was in his “zone” and not very talkative, it was like his pre-game mental workout. After the show, he was bright-eyed and was open to conversation. He explained that he was quite ill four years ago and in fact was on anti-depressants that made him sick. He commented in a funny way “I was on Klonapin, they worked, and I wasn’t depressed, but it made me real sick.”  Johnny also mentioned when I asked about any new recordings, it will be a while but they are recording some new tracks and its going to be very special. I mentioned how great the band sounded tonight, and Johnny looked up at me, visibly energized and focused in the moment, he then commented, “I had lot of fun tonight.”
The Mahaiwe reminded me of The Colonial in Pittsfield, Mass. but just a bit smaller. It is a beautiful facility, and it ought to be after investing 9 million dollars into it for renovations. There is a massive intricate marble or concrete carving that goes around the stage, creating an old-fashioned picture frame for the performing artist to step into. With very simple and colorful lighting for a backdrop, it made a pleasant treat for the eyes.
The band introduced Johnny in grand fashion tonight. Everyone came out and then started into a free form jam, lead by Paul Nelson, who is quite a six-string slinger in his own right. After around 5 minutes of high-energy instrumental blues-rock, Johnny came out and sat down on his stool and the festivities began.
Johnny’s voice is strong and his playing sounds as fresh and inspired as it has ever been. Some highlights of the night were “Blackjack” a smokin’ number that prompted hoots and hollers from the audience. Although the audience was appreciative of the band’s efforts they certainly were not your typical blues crowd, in fact they were subdued in comparison to what I have witnessed in the past. That did not matter, as the Johnny Winter Band proved to be worth the price of admission from start to finish.
Other highlights of the evening included the Hendrix song “Red House,” which was smoldering hot. Winter did it justice and I know Jimi is smiling somewhere right now. Another performance that was exemplary and one that everyone acknowledged immediately was perhaps Johnny’s most widely know song “Highway 61,” which ended up being part of the encore. I also have to mention the one song the drummer Vito Liuzzi provided the lead vocals for, “Tore Down,” it was a rousing number filled with soul and sweat, a real blues classic done well.
This was a very special night and one I will never forget. Thanks for coming back to music, your legacy Johnny, continues to grow with every performance and album you release.