Concert Review: Justin Hayward In Concert At The Colonial Theater In Pittsfield, Mass. 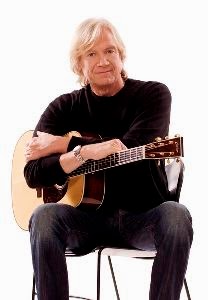 Another legend of music graced our paths last night at the Colonial Theater in Pittsfield, Massachusetts. Justin Hayward, the voice of the Moody Blues, took the stage and entertained us with his catalog of Moody Blues hits and solo material from the 2013 Spirits of the Western Skyrelease.

Prior to that happening Hayward walked out on stage to introduce Mike Dawes, a young emerging artist that specializes in finger picking the acoustic guitar. Dawes was a one man band with all of his techniques and various sounds and effects. He made his way through 4 songs before coming back to the stage to be part of Hayward’s band. Julie Ragins also joined them on keyboards and backing vocals. The young lady added a nice layer of sound with the keys and her smooth vocals.

Hayward is a spry 68 and he sounds amazing. He is every bit the proper English gentleman on stage and he delighted the capacity crowd with his melodic acoustic guitar playing and surprisingly strong and poignant vocals. When you go to a concert to see someone that got their start in the 60s there is some trepidation as to be expected but as usual when I attend these events I am very pleased with what I hear.

Hayward kicked off the evening with one of the Moody Blues hits “Tuesday Afternoon” and that got the crowd in the right mood. For the first time I witnessed an audience that got to their feet to applaud an artist after every number. It was quite a tribute to Hayward. He has a strong following to this day. He asked the audience if they were at a certain event recently and a large portion of them raised their hands in recognition, followed by hoots and hollers of course. It was a nice thing to see that kind of acknowledgment and well deserved I might add.

I must tip my hat to Mr. Dawes for playing some excellent backing guitar on acoustic and electric and Ms. Ragins for her marvelous keyboard fills, lovely vocals and visually pleasing expressions as each song played.

As Hayward traversed his way through the Moodies hits and solo material his voice got stronger. His in between song conversation with the audience was interesting and informative and it added to the overall intimate ambiance that the Colonial offers at any live concert. Towards the end of the evening as the show continued to gather momentum, Hayward launched into a gorgeous rendering of “Forever Autumn” followed by “Question.” For the encore the night reached its pinnacle with the mega hit “Nights In White Satin” followed by the most excellent “I Know Your Out There Somewhere.”
Justin Hayward is a real showman and he still has the magic touch with his guitar and voice. The songs soothe your soul and make your heart smile. Thank you Mr. Hayward for a special night out and one I shall remember forever.

Set List:
Tuesday Afternoon
It’s Up To You/Lovely
In Your Blue Eyes
The Western Sky
New Horizons?
In The Beginning
One Day, Some Day
The Eastern Sky
What You Resist Persists
Wildest Dreams
Forever Autumn
Question
Encore: Nights in White Satin
I Know Your Out There Somewhere
Posted by Keith "MuzikMan" Hannaleck at 5/15/2014