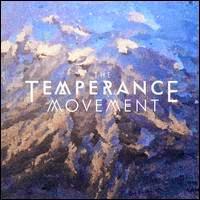 “Blues-drenched, soulful and loud – with an instantly recognizable explosive live sound” is how the British rockers, The Temperance Movement, describe themselves. No amateur musicians here, as various members have played with and are connected to such acts as Ben’s Brothers, Jamiroquai, and The Waterboys.
Based out of London, The Temperance Movement consists of Phil Campbell (vocals), Paul Sayer (guitar), Luke Potashnick (guitar), Nick Fyffe (bass), and Damon Wilson (drums).  Their debut studio release, The Temperance Movement, is rock and roll in its top form. They play their music with skill that is masterful and an attitude that is unshakable.
Their claim of being “Britain’s next great rock and roll band” is one that they waste no time in justifying with the first track.  From the opening chords of “Only Friend,” it is evident that The Temperance Movement is the real deal.  The guitars are just mesmerizing and the passion in the lead vocals and behind the music are undeniable with the magic in their sound clear as the song goes on. “Ain’t No Telling” keeps things lively and the perfect example of their “blues-drenched, soulful” sound.
“Pride” is a masterful low-key song showing that The Temperance Movement is just as fantastic when they turn it down and elect for a softer, more poignant approach.  With its smooth, effortless sound, “Be Lucky” is an all-around fun song that has a breezy atmosphere to it. Things are back to rocking and rolling with the edgy and lively “Midnight Black.” Its manic energy is contagious.
Heading into the second half of the album, “Know For Sure” and “Morning Riders” are two rocking songs with a cool, laid-back attitude to them.  These are some jams to drink and barbeque to on a nice summer day.  The Temperance Movement taps into a more Americana sound with the country sounding “Lovers and Fighters.”  “Take It Back” is nothing short of a cracking song that hooks one in with its energy, catchy chorus, and dazzling guitars.  “Smoldering” is another low-key song that packs a lyrical punch.  “Serenity” closes things out by capturing the essence of its name, as the music and vocals go by like a light breeze.
The Temperance Movement’s self-titled debut release is nothing short of greatness.  This is real, passionate music that destroys all the crap cluttering up the television and radio.  I am not ready to declare them the saviors of rock, music messiahs, or anything like that because this is just their first full-length release, but there is no denying that they know how to make damn fine music.  If you are looking for some rocking music, then look no further than The Temperance Movement.
4.5/5

Key Tracks: Only Friend, Ain’t No Telling, Take It Back
Brian McKinnon
April 12, 2014
Review Provided By Write A Music Review
Posted by Keith "MuzikMan" Hannaleck at 4/12/2014