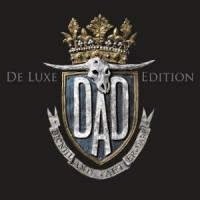 I don’t know what it is about the rock bands that come from the Scandinavian regions. I have reviewed a few of them over the years, and they certainly seem to love their rock. They seem to be un-phased by the stigmas that have plagued hard rock in the U.S. for the past 20 years or so, and their music is better for it. D-A-D (formerly Disneyland After Dark, but forced to change their name for obvious reasons) is no exception to this.
D-A-D has been rocking out since the mid 80s. The core of the band has been together this entire time. Jesper (lead vocals/guitar) and Jacob Binzer (guitar), and Stig Pederson (bass/vocals) have a dozen studio albums to their name, and Laust Sonne has been with them on drums since 1999. Their last several albums have continually done well on their native Danish album charts, generally climbing as high as first or second, and Dic.Nii.Lan.Daft.Erd.Arkis no exception.
If this is your first listen to D-A-D, I don’t think you would think that they had been doing this for 30 years. From the opening notes of “A New Age Moving In” there is a youthfulness and energy that exists in this band that many new bands wish they had, never mind ones with this kind of tenure. The result is a strong rock album full of influence from the 70s, 80s, and 90s, but still has a modern sound and avoids the clichés that have hurt many a rock band over the years.
What I also enjoyed about Dic.Nii.Lan.Daft.Erd.Ark is that they balance the album up from track to track. Songs like “Fast on Wheels” and “Breakin Them Heart By Heart” add a pop/rock style, while ballads like “We All Fall Down” and “Your Lips Are Sealed” show that D-A-D can slow it down from time to time as well. And if you purchase the Deluxe version of Dic.Nii.Lan.Daft.Erd.Ark you get another 16 tracks of acoustic and live recordings. I don’t know if you’ll prefer many of the acoustic versions to the album versions, but it is nice hearing the tunes stripped down and in such a raw form. The live tracks cover songs from previous releases as well and give you a glimpse at what D-A-D sound like live as well.
Dic.Nii.Lan.Daft.Erd.Ark is a quality rock album, and spending the bit extra for the Deluxe Edition is well worth it for the 16 tracks of additional recordings. It’s certainly not one of those bonus discs bogged down with sloppy alternative takes or material that wasn’t good enough to make an album. Ultimately D-A-D has once again shown that they can withstand the test of time. Not only withstand it, but can evolve as a band and keep their sound fresh when it can be so easy to put out more of the same. Dic.Nii.Lan.Daft.Erd.Ark is sure to fill a need for those of us that still love to rock.
4.5/5 Stars
Key Tracks: A New Age Moving In, Breakin Them Heart By Heart, We All Fall Down
Kevin Kozel
April 11, 2014
Review Provided By Write A Music Review