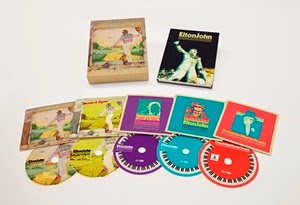 So where does one start with an album that has become part of them over the years? This is music that shaped a generation and holds so many memories. Just like The Beatles and Rolling Stones and their many landmark releases, it had a tremendous impact when it came out and it remains one of the greatest rock recordings of all time. Elton John’s classic double album Goodbye Yellowbrick Road is celebrating its 40th Anniversary this year. With a string of hit singles, just as his releases that came before it, this became a classic album. It stands out more than others because of the cross sections of genres presented within the 18 tracks.

A good friend of mine had this album on eight-track and played it a lot. I did not have it at the time and was actually not too sure about it when I first heard it. That opinion changed in a matter of a few months after EJ was releasing one hit after another from this impeccable collection of musical diversity. It was hard to ignore if you listened to the radio, which we all did in those days. I would have to say that it was very progressive in nature as EJ explored all the genres and molded and shaped each song into something special and memorable. “Funeral For A Friend/Love Lies Bleeding In My Hands” still throws a chill up my spine to this day. The beautiful and tragic “Candle In The Wind” brings rushes of sadness for the terrible ending of Hollywood’s icon Marilyn Monroe. The spirit and angst of teenagers comes at you with excitement on “Saturday Night’s Alright For Fighting.” It still sounds like the perfect rock song to stomp your feet to and shout out let’s rock! As I cranked up the volume to annoy my parents and neighbors one more time on a sturdy turntable or portable cassette player, everyone within earshot was reminded of the reach of EJ. Of course this was after hearing the songs play all day on the radio. That is how word spread when this album was released.

There have been several reissues and remasters of this album and I have had the pleasure of hearing two up to this point. They both had their moments and were appreciated however I would have to say that this version really nailed it for overall sound and clarity. I noticed both subtle and eye popping changes and for the first time I was able to understand most of Elton’s vocals that eluded me. That is a major change and improvement upon previous versions.

Being the 40th anniversary there were many different things added to the package besides a complete overhaul of all the tracks. The first disc is the original double album, which by the way would be in my top ten desert island discs. And the second CD is interpretations of the songs by various artists. While I could appreciate the diversity and artistry involved it was not something I really enjoyed because they were so far away from the originals. This is the kind of album that is rock’s sacred ground that should not be trifled with. It’s fun and different but it would not have bothered me in the slightest if it was omitted from the package.

The third and fourth discs are vintage performances at The Hammersmith in 1973. The sound quality is good and what you would expect for that time frame. It features Elton and his band pumping out the hits going full strength from beginning to end. It’s not anything extraordinary but nice to hear how they presented all of that great music in a live setting back then.

The DVD is Bryan Forbes' 1973 film Elton John and Bernie Taupin Say Goodbye To Norma Jean and Other Things. I found this movie very informative and entertaining. The up close interviews with Elton and band provide insight into the recording process and really shed light on the fact that EJ was a musical genius and Taupin a brilliant songwriter. What I did not know was that Elton never wrote music down, it was all right inside his head and then he just played and everyone else added their parts. If anyone was wondering why the man was so flamboyant and eccentric? It was because he was brought up in a very strict household. Imagine not being allowed to wear hush puppy shoes? These are the kind of restrictions he had growing up. So that explains the different colored hair and the crazy glasses he used to wear, not to mention the outfits he would present on stage. Yes many of us knew that there was more to his flamboyance  and behavior before he formerly announced that he was gay publicly. I also got the references to “Sweet Painted Lady” and “All The Young Girls Love Alice,” his nod to prostitution and lesbians. None of that ever made me bat an eyelash, I simply loved the music but was not oblivious to the meanings of the songs. Back then I guess he got away with something whereas today it would not be anything out of the ordinary.

Then to top off this collection you get a 100 page hardback book discussing the album, EJ’s career, rare pictures, and words to every song. Needless to say this is quite the package to take in and enjoy, and that I did. The music can stand alone but the icing on the cake was all the extras and it sure made it more fun and an insightful look into one of the greatest rock records ever made. Goodbye Yellowbrick Road 40th Anniversary is one big party befitting its legendary status and a must have for any music fan.

Key Tracks: Funeral For A Friend/Love Lies Bleeding In My Hands, Saturday Night’s Alright For Fighting, Candle In The Wind