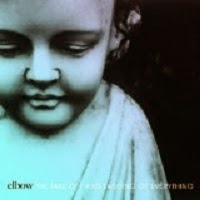 Elbow is another case of a band that is extremely well known in the UK, but is relatively unknown in the US. The band has released six studio albums dating back to 2001, all of which have been in the top 15 on British album charts. In 2008 they won the Mercury Prize for The Seldom Seen Kid and even won a Brit Award for Best British Group in 2009. The Take Off and Landing of Everything is their latest release.
I didn’t really start listening to Elbow until their fifth album, Build a Rocket Boys! I’m not positive what made me get into them all of a sudden, but once I did I suddenly wanted everything they ever released. They just craft these beautifully epic songs that have this Bends/Ok Computer-era Radiohead vibe to them. The mellower stuff they were making at the time. They seem fairly simple at first, yet have these layers and intricacies to them that make them so much more by the time the song is over. The music is well written and the lyrics are intelligent and deep. It’s not surprising that the songs aren’t exactly singles in the U.S. as the style tends to be more mature and lack the pop sensibilities that tend to dominate the airwaves. I suppose that is why so many are unfamiliar with this great band. The simply don’t hear them enough.
With The Take Off and Landing of EverythingElbow continues their tradition of putting out very good albums. Many bands struggle to make quality music as they age. It’s easy to get boring as you get older, become more successful, and settle into a more comfortable lifestyle. This is not the case for Elbow as they express the struggles of becoming middle aged in a way that is relatable and doesn’t come off as pretentious. It could easily be depressing for some, but in the end it’s really just a story of learning life’s ebbs and flows and how they differ with age.
Musically the Take Off and Landing of Everythingis still very much Elbow, but there is definitely more experimentation here. They venture off some, but certainly don’t lose their audiences expectations. The first song I heard from the release, “Fly Boy Blue/Lunette,” definitely brings something new to the table and got me really excited for the release. The album brings in more horns, strings, organs, and effects. Most of the time they work well, as one would expect with this band’s appreciation for detail. Occasionally it does seem they try too hard though. I didn’t care much for the closing track, “The Blanket of Night,” and as the closer its impact hits harder then had it been in the middle. I definitely wouldn’t consider this Elbow’s finest album, but it is still quite good and I have enjoyed it more with each listen.
4/5 Stars
Key Tracks: This Blue World, Fly Boy Blue/Lunette, New York Morning
Kevin Kozel
April 4, 2014
Review Provided By Write A Music Review
Tracks:
01. This Blue World
02. Charge
03. Fly Boy Blue/Lunette
04. New York Morning
05. Real Life (Angel)
06. Honey Sun
07. My Sad Captains
08. Colour Fields
09. The Take Off and Landing of Everything
10. The Blanket of Night
Posted by Keith "MuzikMan" Hannaleck at 4/07/2014