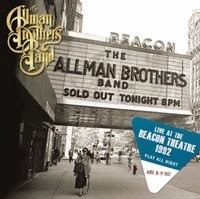 The Allman Brothers Band have gone through several incarnations over the years and they are set to go through yet another one with the departure of longtime percussionist Butch Trucks and guitarist/vocalist Warren Haynes. Somehow Gregg Allman will find a way to restructure the band just like he did when he lost his brother Duane tragically to a freak motorcycle accident in the early years of the band.

Part of their resurgence after an extended breakup was the reforming and performing at The Beacon Theater in New York. The other factor was getting Warren Haynes into the fold to give Dickey Betts a run for his money. It worked out very well and the chemistry was clicking. The performances at The Beacon were so successful that the band became permanent residents and had annual concerts that ran for several consecutive days. All of this is now history and the performances are legendary.

There are two recent releases that document that time frame in the 90s, when The Allman Brothers Band was on 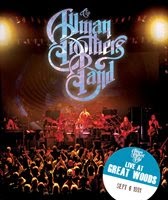 fire again. A 2 CD set titled Play All Night: Live At The Beacon Theater 1992 and a DVD Live At Great Woods.
This band served as the blueprint for jam bands going forward. With three percussionists, two guitar players, keyboards, bass and three capable lead singers, their excellence at every station was their conduit to a foolproof performance regardless of where they played. Both sets bring this to bear in the most superlative fashion. You hear it straight on through the CD set and see it happening before your eyes on the DVD.

At the very top of the mountain is the phenomenal track tailor made for an in concert jam titled “In Memory of Elizabeth Reed,” which proved to be their trademark jam session clocking in at over 20 minutes. Anyone that is fan of the band is very familiar with the track and will certainly agree that the music becomes more compelling and expansive in a live setting. The ABB have been able to successfully meld rock, blues and jazz and come up with an explosive sound reaching many splendid apexes. In turn they could also slow it down and show a softer acoustic side when they wanted as witnessed by the mini acoustic set they performed at Great Woods Center for the Performing Arts (check out the provided video of the classic “Midnight Rider”). The curtain closer on the CD set “Whipping Post” is reminder of how the ABB have reigned supreme as a headliner for so many decades. Their resiliency and wherewithal is something to be admired.

The most enjoyable factor with these two sets is that you get the best of both worlds, the audio and visual experience. Every aspect of the ABB is on display throughout these releases and a must have for any fan to add to their collections.